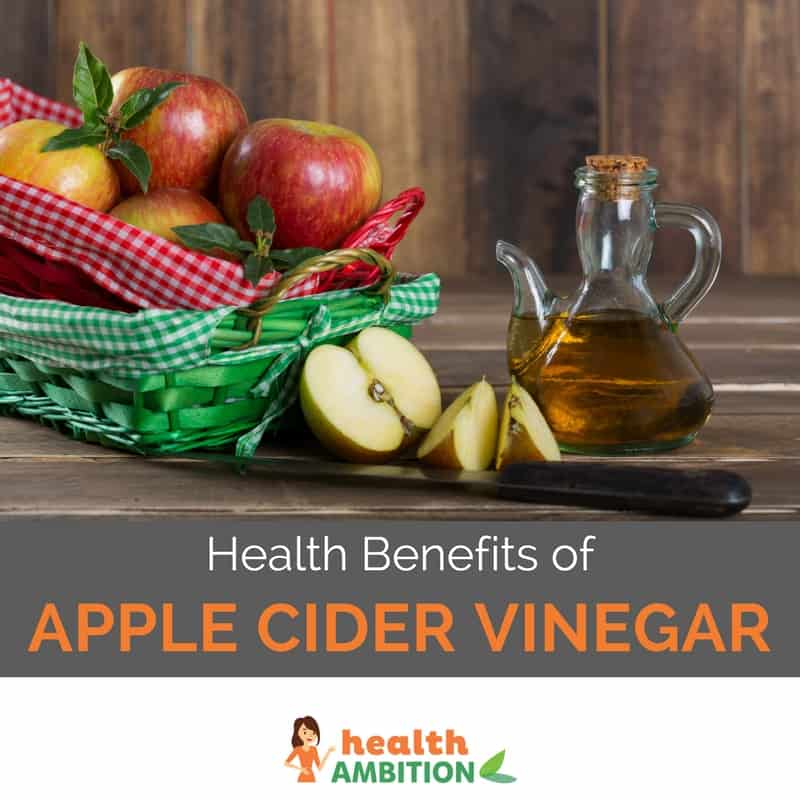 Vinegar is thought to have a ten thousand year history, having been used for hundreds of different purposes. It was a key ingredient in many remedies and used to flavor and preserve foods in ancient civilizations.

Records show the use of vinegar by the Babylonians in 5000 BC. Traces of vinegar have been found in ancient Egyptian urns dated to 300 BC. It is mentioned in texts of ancient Greece and China, and was even used by Hannibal to crumble rocks to aid his passage through the Alps!

Even today, people use apple cider vinegar not only for the obvious purpose in a variety of different culinary dishes, but also for all kinds of cleaning, removing stains on clothes, carpets and teeth, restoring leather products and even as a weed killer. (source)

Recently, apple cider vinegar has become very popular, and has been the subject of much speculation. It is thought to have many important health benefits, including lowering blood sugar levels and decreasing the symptoms of diabetes.

What Is Apple Cider Vinegar?

Vinegar is made by a similar fermentation process to alcohol. In fact, alcohol will turn into vinegar if exposed to the bacteria naturally present in the air.

To make apple cider vinegar, apples are pulverized to release the juice. The juice is mixed with yeast and bacteria, which convert the sugars in the liquid to alcohol.

The mixture then goes through a second fermentation process which

converts the alcohol into many different acids, including acetic acid. And voilà – we have apple cider vinegar. (source) 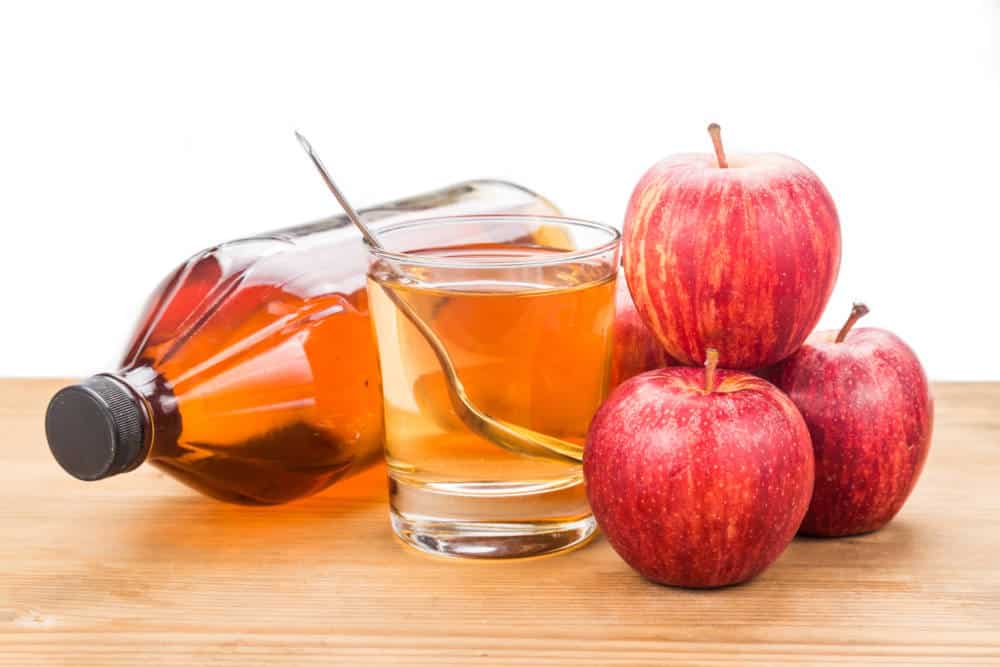 Scientific research has now proven what moms and grandmas all over the world have known for decades: vinegar kills bacteria.

In one study, vinegar proved just as effective as many commercial products at eliminating bacteria such as E. Coli and staphylococcus aureus.

These bacteria busting properties are the reason why vinegar is used to preserve food and can decrease the risk of food poisoning. (source)

One study showed that vinegar wiped out an impressive 95 per cent of viruses present in food, proving that vinegar is an effective natural way to preserve food and decrease health risks. (source)

The Centers for Disease Control and Prevention (CDC) estimate that nearly 30 million people in the US currently have diabetes.

Even if you don’t have diabetes, there are significant health risks if you have high blood sugar. There are two main factors that need to be controlled to maintain normal blood sugar levels – what we consume and how much insulin we produce.

When we take in refined sugars and carbs, it causes a rapid spike in the level of sugar in the blood. This increases the amount of insulin we produce as the body attempts to get blood sugar level back down to within normal range as quickly as possible.

This can result in a roller coaster effect on your blood sugar, and carries many health risks.

Studies have proven that apple cider vinegar reduces fasting blood sugar by 4 per cent. When we consume vinegar with refined carbs it can reduce blood sugar levels by over 31 per cent. (source)

Insulin resistance, or decreased sensitivity to insulin, is a major risk factor for developing type II diabetes. Results of some studies have proven that apple cider vinegar can increase insulin sensitivity by between 19 and 34 per cent. (source)

According to the National Institute of Diabetes and Digestive and Kidney Diseases, two out of three people in the US are overweight or obese. Obesity carries a considerable amount of health risks, including increased risk of diabetes, high blood pressure, heart disease, liver disease, stroke, some types of cancer and osteoarthritis. (source)

Many studies have researched the effect of vinegar on satiety – the feeling of being full after eating. They found that it can reduce our appetite and reduce calorie intake by up to 275 calories. (source)

In terms of carrying extra pounds, one of the most significant risks to health is excess abdominal fat. One study found that vinegar significantly reduces body mass, waist circumference and abdominal fat. (source)

The importance of a healthy heart is well known. According to the American Heart Association, heart disease accounts for one in every three deaths in the US.

One of the biggest dangers to heart health is a high level of certain types of cholesterol in the body. Scientific research using non-human subjects observed a significant decrease in total cholesterol level and triglycerides – another type of fat in the blood – with use of apple cider vinegar. (source)

There is scientific evidence that the acetic acid in vinegar reduces blood pressure.

Apple Cider Vinegar Is An Antioxidant

Experts believe that antioxidants prevent or limit damage to blood vessels, and can decrease the risk of or may even help to prevent a variety of different medical conditions. These include atherosclerosis, some cancers, muscle degeneration, some types of arthritis and Alzheimer’s disease.

Apple cider vinegar has been shown to contain chlorogenic acid, a phytochemical also found in coffee.

cholesterol molecules and preventing oxidation. This is an extremely important factor in reducing the risk of heart disease and stroke. (source)

Fungi and yeasts are present naturally in our bodies and on our skin. When they are given favorable conditions, they can multiply uncontrollably and cause health problems.

Apple cider vinegar has been shown to be effective against various types of yeast, such as Candida Albicans, the type of yeast responsible for the uncomfortable symptoms of thrush. (source)

Many claims have been made on various websites that apple cider vinegar can positively affect some types of cancer.

Certainly, many studies have shown that some types of vinegar can reduce the size of tumors and kill cancer cells. However, the majority of the research has been conducted in test tubes. In addition, most of the research used Japanese rice vinegar, cane sugar vinegar and red wine vinegar.

While it may be true that the components of apple cider vinegar can affect cancer cells, at present it’s not possible to back this up scientifically. More research into this subject is needed. (source)

In recent years, apple cider vinegar has attracted a lot of attention in health and fitness communities. As a result there is a considerable amount of speculation and anecdotal evidence regarding its potential health benefits.

Some people use it to improve the condition of hair and skin, to soothe sunburn, repel insects, relieve allergies, as a cure for colds and acid reflux, to reduce the size of warts and heal injuries from poison ivy.

Apple cider vinegar may well be effective for some people for many of these conditions. There isn’t enough evidence to state categorically that apple cider vinegar is useful in these instances – but it may be worth a try.

If you want confirmation to say whether or not apple cider vinegar is effective for these conditions is likely to be a long wait, as natural products are not often the subject of extensive research unless it’s for a specific reason.

Apple cider vinegar is certainly an option for people who like to enjoy a natural, organic, chemical-free lifestyle.

How To Use Apple Cider Vinegar

The research regarding apple cider vinegar suggests it is a worthy addition to most daily routines. There are no side effects and it’s easy to add it to sauces, soups and salad dressings. Some people prefer to take it straight up, but most dilute it with water.

Selecting a high quality, organic, filtered apple cider vinegar is likely to have the best results, since these include those added extras – the good bacteria, enzymes and proteins which are thought to be particularly beneficial for health.

Most of the research on apple cider vinegar used a daily dose of between 15 and 30ml. Because of the acid content, doses above this level are not recommended and may have a negative effect on some conditions.

There are a wide range of apple cider vinegar tablets and capsules currently available on the market.

However, some research studies have evaluated various different apple cider vinegar tablets for their content, and found that there was considerable variation between different brands.

The research even questioned whether or not apple cider vinegar was an ingredient in the products. (source) 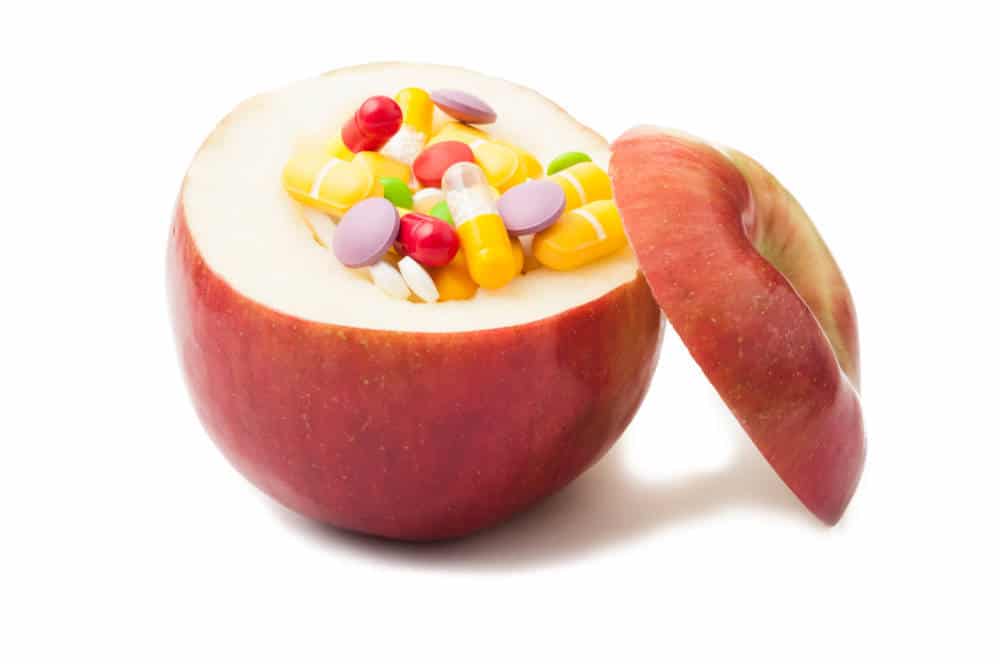 Will Apple Cider Vinegar Cure Me?

Apple cider vinegar has some important health benefits as an antioxidant, an antibacterial and antifungal treatment. It can help to lower blood sugar and reduce the risk of diabetes, heart disease and stroke. It’s a naturally chemical-free product.

Apple cider can help as part of a weight loss program. It may also have numerous other health benefits and uses that have yet to be scientifically proven. What it is not is a one size, fits all, miracle cure for everything.

Is apple cider vinegar going to get you down to your target weight if it’s the only change to your routine? Will it completely cut your risk factors for diabetes, heart disease and stroke if you continue to eat unhealthy foods, smoke and take no exercise? Will it reduce the risk of diabetes if you drink a tablespoon of apple cider vinegar before drinking a liter of regular soda?

The answer, unfortunately, is no. Whether you are trying to lose weight in general, decrease the amount of abdominal fat or you are trying to reduce blood pressure and cut the risk of heart disease and stroke, what is always needed is a combined approach of several changes to lifestyle.

A sensible, healthy eating plan and regular exercise are probably going to more effective in reducing your health risks than just adding apple cider vinegar to your current lifestyle. However, with its reported health benefits, apple cider vinegar seem like an added bonus which will help you to achieve the results you want.