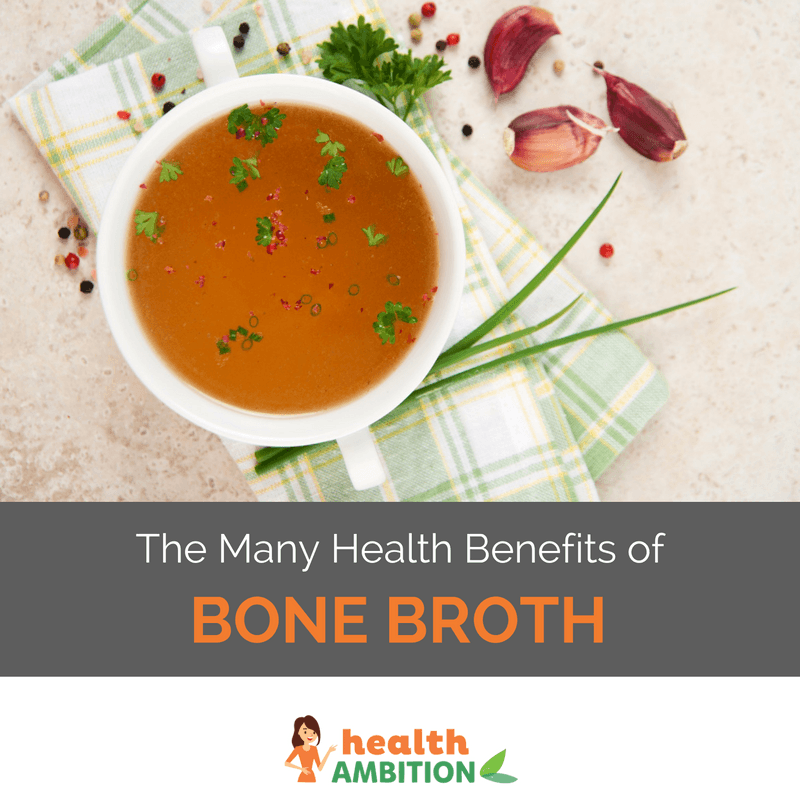 Have you heard of bone broth? It’s starting to become the next health food craze.

What does this weird soup have to offer? According to bone broth fans, Grandma may have been right when she said it was cure-all for any and all illnesses.

To be honest, it sounded a bit disgusting to me at first but after hearing the details from many health gurus I tried it. I promise it’s much tastier than it sounds.

Today I’m going to get into the nitty gritty of the health benefits of bone broth. I bet you’ll find a reason or two to at least give it a shot.

What is Bone Broth?

Bone broth is essentially a soup base made by boiling the bones of cows, pigs, chickens, or turkeys. It’s then strained to separate the solids from the liquid. The liquid, often salted and seasoned, is the famous bone broth.

Bone broth has been a staple in many diets around the world for a very long time. It allows us to use more of an animal, wasting less. It also contains many of the meat’s nutrients in an easy-to-digest liquid form. 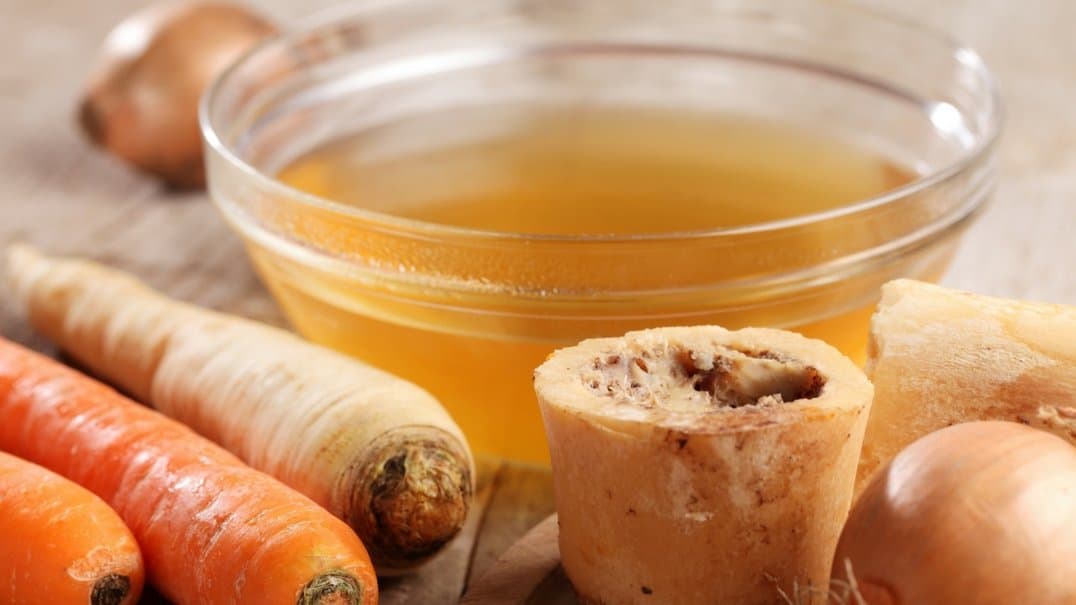 What’s the Difference between Bone Stock and Bone Broth?

Bone broth is typically made with an acid (like vinegar), and is salted and seasoned already. It’s ready to consume plain.

This is the health food we’re discussing today. Its popularity is largely due to its palatable nature and the idea that the acid helps extract nutrients from the bones.

Bone stock is a lot like bone broth, only without the acid and seasoning. Bone stock makes a great, rich soup base, but it isn’t often known for its health benefits.

Where Can You Get Bone Broth?

Bone broth can be found at plenty of trendy restaurants nationwide. Strange as it may seen, it’s often thought of as a delicious, healthier alternative to morning coffee.

You can check out your local health food store and see if they offer fresh bone broth, or you can purchase various types of bone broth online.

You can also make your own bone broth. Even if you’re no gourmet chef, it’s fairly easy to construct. You simply boil bones in water with a splash of vinegar for 6-24 hours. The long cook time ensures that the nutrients in the bones make their way into your broth.

You can purchase bones at your local supermarket or butcher shop. Bones from wild game are also appropriate, if you have a hunter in your life. If you need additional guidance on making your own broth, there are a wealth of resources available online to help you on your way.

What is in Bone Broth That Makes it So Healthy?

Bone broth contains some important minerals, like calcium, phosphorous, magnesium, and potassium. These nutrients are all good reasons to eat bone broth regularly, but there’s more.

This liquid health tonic also contains gelatin, collagen, proline, glycine, glycosaminoglycans, hyaluronic acid, and chondroitin sulfate. These are all known for their contributions to connective tissue health – including hair and nails.

There are plenty of people out there that say that bone broth is good for your digestive tract. The theory behind this is that the gelatin in bone broth helps soothe the tract and even potentially help its lining to heal.

Smaller bones are supposedly better for this due to their high gelatin content. Keep that in mind if you’d like to try bone broth to cure your digestive ills. While there’s little science behind using bone broth for this purpose, it won’t hurt to give it a go. 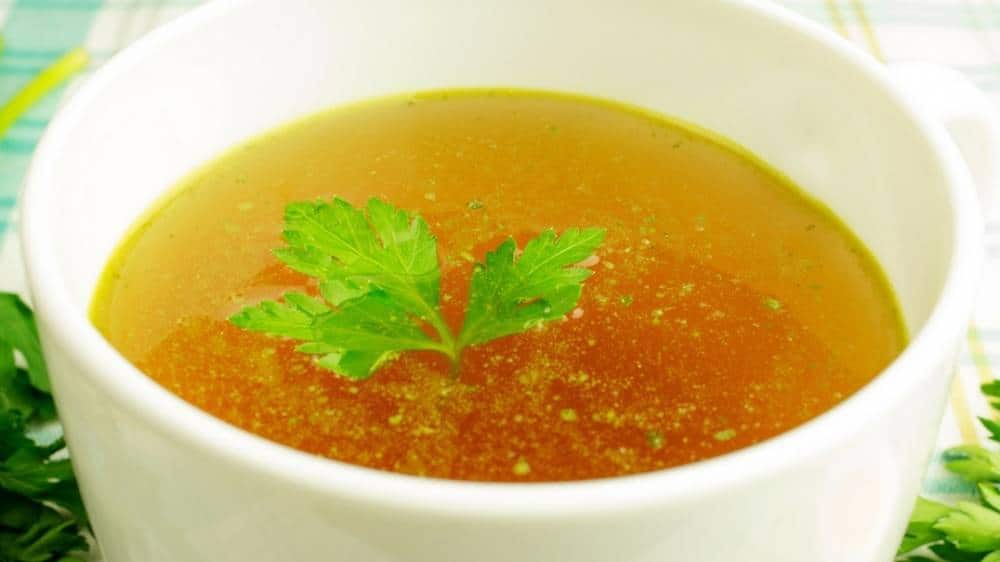 Some of the minerals in bone broth play a crucial role in the immune system. First, calcium stimulates the release of white blood cells to allow the immune system to attack potential invaders like viruses, and also to begin the healing process.

While the relationship between magnesium and the immune system hasn’t been fully fleshed out yet, it’s undeniable that there’s a connection.

Research also shows a tenuous but undeniable connection between phosphorous and the immune system, as well.

While there’s no real evidence saying bone broth as a whole contributes to a stronger immune system, the fact is that many of the nutrients it contains absolutely do help strengthen your immunity. Whether it will actually help fend off your next cold is likely an issue of mind over matter.

Reduces the Appearance of Cellulite

The theory behind this particular health claim is that the collagen, hyaluronic acid, and gelatin in bone broth help to eliminate cellulite. Some gurus state that this is due to bone broth’s ability to eliminate toxins, which they say contribute to cellulite.

The ‘toxins cause cellulite’ theory has been debunked. Toxins aren’t really the cause of cellulite. Cellulite is caused by connective tissue under the skin contorting accumulated fat molecules to create a lumpy, cottage cheese-like appearance.

However, there is some real evidence that points to the dietary collagen and other compounds in gelatin reducing the appearance of cellulite. While these findings aren’t wholly conclusive and were dependent on body mass index, there’s a chance bone broth may actually help with this issue.

The glycine and proline in bone broth may also help reduce the inflammation that often accompanies joint pain. In fact, joint pain is frequently the result of inflammation, so these compounds may provide a double whammy solution.

Inflammation is an immune response that sends white blood cells to the site of an injury or infection to fight off potential invaders and begin the healing process. Pain is one of the side effects of inflammation, with the others being redness, swelling, the area being warm to touch, stiffness, and loss of function.

Helps you Sleep and Contributes to a Calm Mind

Not sleeping well or not sleeping enough can lead to myriad health conditions, and it can make you feel pretty awful too. Bone broth might be able to help you out. Calcium and magnesium (both present in bone broth) have been found to alleviate insomnia.

Forget about chicken soup for the soul, bone broth is where it’s at. The glycine found in bone broth is often used as a supplement to promote a calm mind and restful sleep. Glycine is found in relatively small amounts in bone broth, so chances are it certainly won’t hurt to test this theory for yourself. 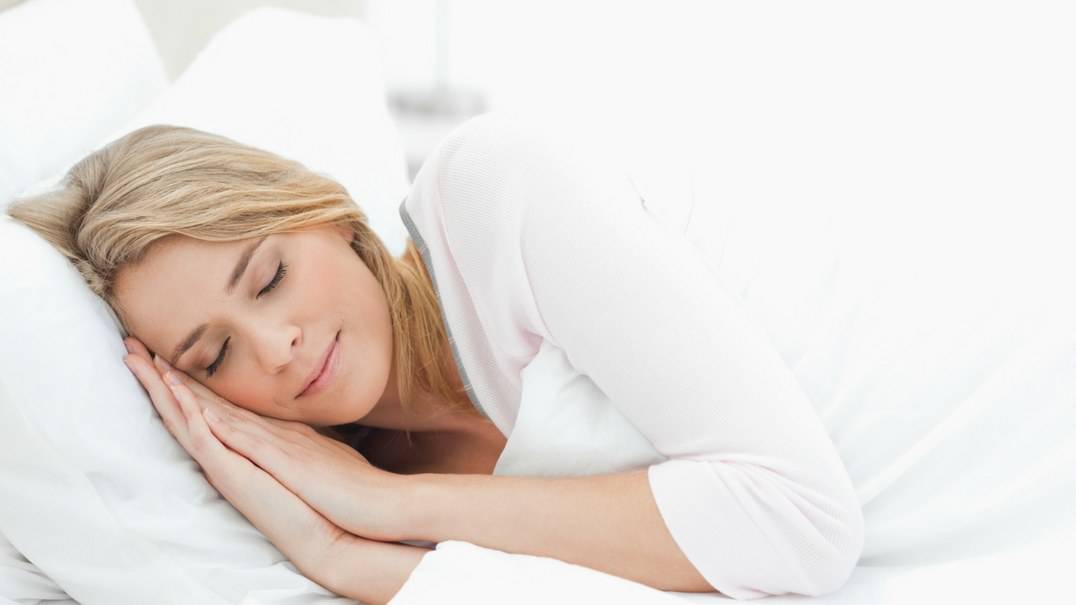 The minerals in bone broth are crucial to the growth, formation, and repair of your bones. Dietary intake of these minerals definitely helps your skeletal system, as long standing data has shown. We’ll look at how each of them contribute.

Phosphorous is the second most abundant mineral in the body. Much of that phosphorous is found in our bones. This mineral works to keep bones, teeth, and joints strong and healthy.

Calcium, thanks in large part to the prolific dairy advertisements, is well known for its contributions to the health of our bones and teeth. Despite the corny commercials, adequate calcium intake has been shown to ward off osteoporosis, or a weakening of the bones.

Magnesium also plays a role in bone formation. It is responsible, at least in part, for directing the activities of osteoblasts and osteoclasts (types of bone cell). Studies show that adequate magnesium levels correlate to good bone density levels.

Supplements intended to help hair and nails grow strong and skin appear glowingly beautiful often contain collagen and gelatin. There is some evidence to support the theory that these compounds reduce the effects of aging.

Collagen is the main structural protein found in our bodies, and deficiency contributes to aging of our skin. Dietary collagen and supplements have been found by studies to actually help reduce the signs of aging and improve the appearance of hair and nails.

Likewise are the results of studies that use dietary gelatin as a beauty aid. While the research in this area is still lacking, preliminary results have shown that women who took gelatin supplements found their skin looked better and felt firmer. 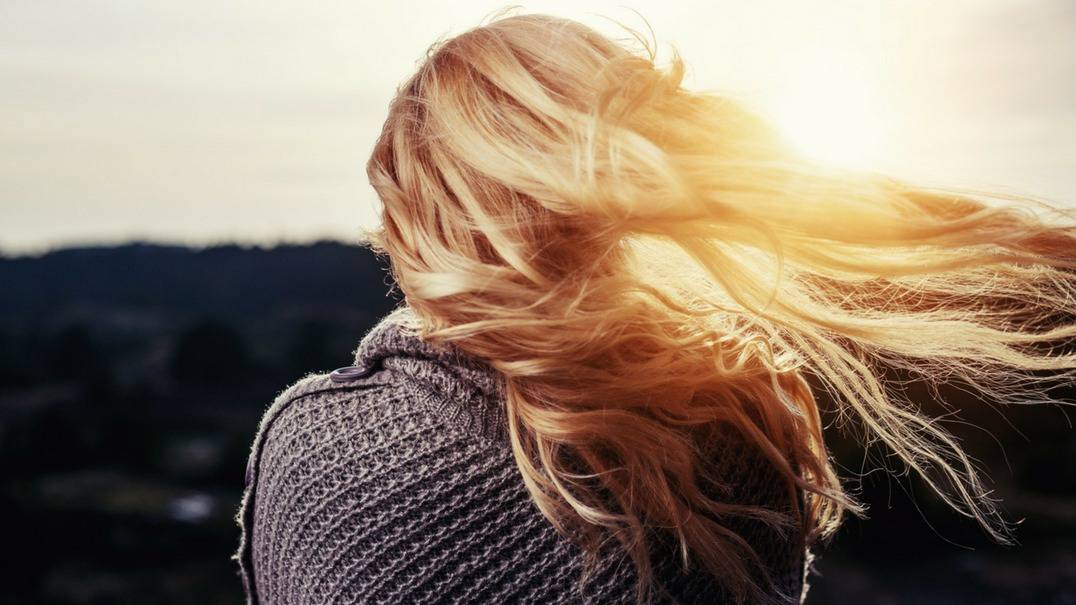 Many of the compounds found in bone broth are often used by arthritis sufferers in supplement form to help alleviate joint pain and stiffness.

Arthritis usually refers to the inflammation and/or degeneration of a joint, frequently accompanied by pain, swelling, and stiffness. Since bone broth contains compounds that we’ve already established help with inflammation, it makes sense that this healthy warm liquid could help.

Bone broth consumption, sounds like a no-brainer, however there are a few concerns to consider too.

Glutamic acid, also known as glutamate, has potential adverse effects on the brain such as seizures. There’s likely not enough of this compound to cause any issue in most people. Cooking bone broth for a shorter period of time may reduce the amount of this potentially harmful substance.

There is also some concern that bone broth may contain lead. Since the levels of lead found in the broth are still below the levels deemed acceptable for tap water, this doesn’t seem to be too much of a concern. 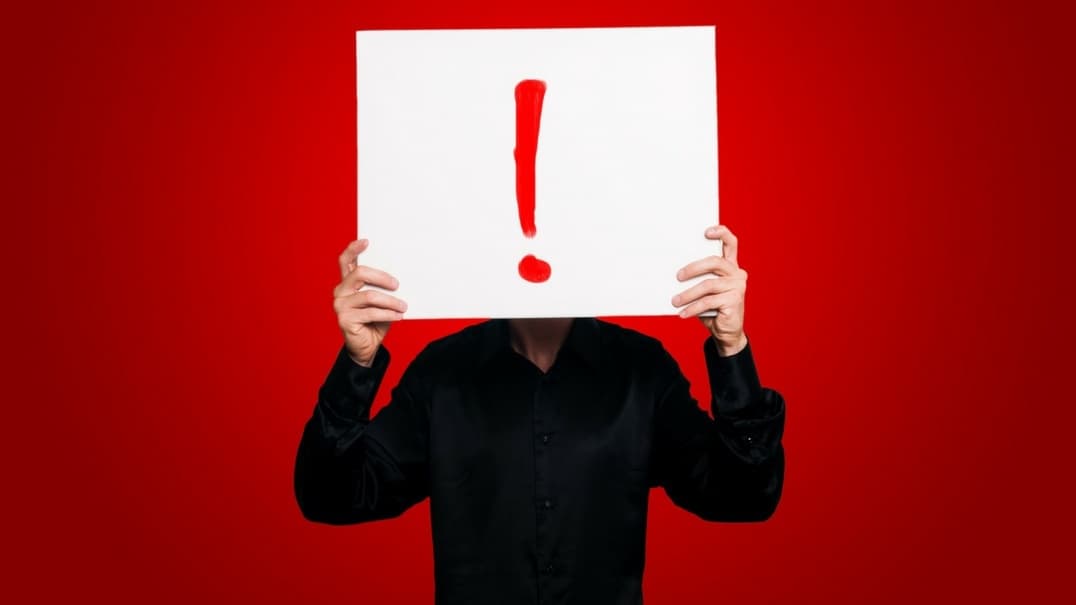 As a general rule, I find that making your own inquiries before buying into miracle cure statements is always a good idea. Don’t believe everything you read on the internet, especially when it comes to your health, and make sure you are aware of the potential downsides of any natural cures you decide to use.

It’s very important to make sure that you’re getting your information from reliable sources, as well. Search for evidence supporting claims using only reputable sources. Use www.scholar.google.com to find genuine studies and their results.

Lastly, I’ll warn you to always check with your doctor before trying out any new health supplement. Drug interaction and a worsening of your symptoms are very real possibilities if you’re not careful. Speaking with your doctor first can help avoid these potential issues.

Is Bone Broth Really Good for You?

Overall, bone broth is most likely perfectly healthy. The evidence that supports the bone broth benefits on the health conditions mentioned above may vary, but the benefits obviously far outweigh the risks in my opinion.

The potential for bone broth to help your immune system, skeletal system, digestive system, and mental well being have convinced me.

I don’t always find these superfood claims realistic, but the benefits surrounding bone broth are fairly plausible. If you have any other questions about the health benefits of bone broth, don’t hesitate to ask!