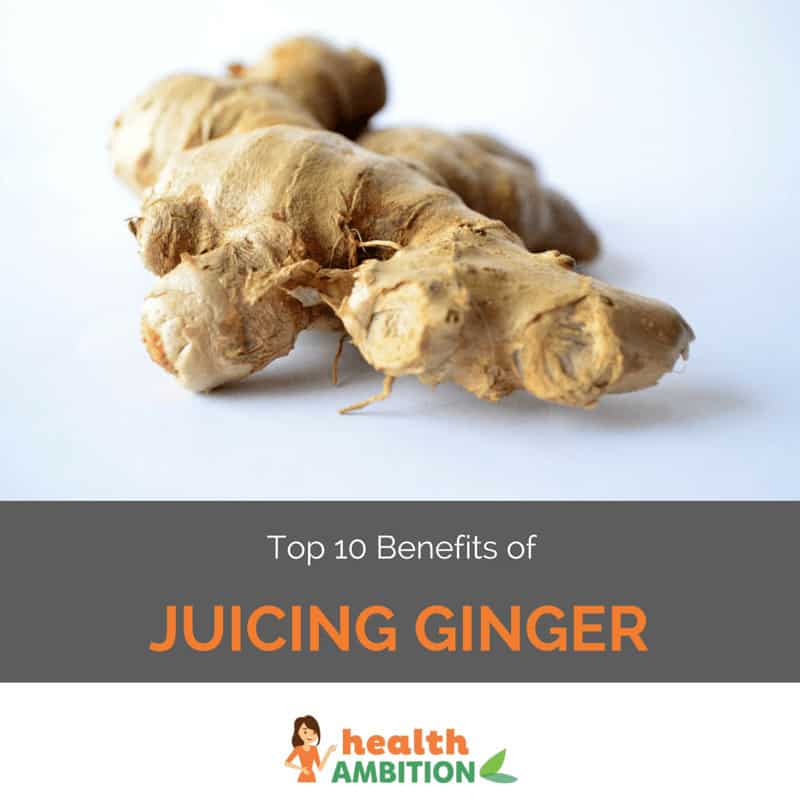 Growing up in Japan, ginger was a staple part of my diet. Pickled ginger was served with sushi and other meals, and ginger was plentiful for those days when I had a sore throat. Hardly a day went by without some form of ginger being added to my food.

But during my days living there, I can honestly say that I was hardly sick. The occasional cough and cold, but nothing too serious. Ginger played a huge role in my excellent health during those years.

Why You Need to Juice with Ginger

If you want to double down on the effectiveness of your juices, it’s worth adding ginger. It doesn’t just add a nice tang to your juice recipes, but you’ll find that there are many ginger juice benefits:

This is one of the benefits of ginger juice that EVERYONE will want, as cancer is probably the most feared disease in the world. Ginger contains special nutrients that can fight certain types of cancer, most notably ovarian cancer.

It will cause the cancerous cells to attack and destroy themselves, thereby reducing the risk of the cancer metastasizing to other parts of the body. Whether you have cancer or just want to prevent it, it’s time to juice with ginger!

Alzheimer’s is a disease involving degeneration of the brain cells, specifically the part of the brain that controls memory. Ginger has been proven to slow down brain cell decline, even preventing the brain cell loss that is usually viewed as the beginning stages of the disease. It’s one of the best benefits of juicing ginger, as it will keep your mind healthy and sharp!

Did you know that one of the ginger juice benefits is its ability to increase your sex drive? According to traditional Ayurvedic texts, ginger is considered an aphrodisiac. It is known to dilate the blood vessels, increasing circulation–particularly to those important sexual organs. To improve “happy bedroom fun time”, add some ginger juice to your day!

One of my personal favorite ginger juice benefits is the stomach-soothing properties the little root offers. If you suffer from IBS or just general stomach upset, drinking ginger tea or eating raw ginger root can help to soothe your stomach. Ginger has a calming effect on your digestive system, preventing that upset from ruining your day!

This is one of the benefits of ginger juice that I had no idea existed! According to one study, people taking ginger supplements every day saw a reduction in exercise-induced muscle pain by as much as 25%! The effects are best with raw ginger, as heating the ginger (to make tea) reduces the compounds that can deal with the muscle pain. That’s why it’s best to JUICE your ginger, and not brew it into a tea!

According to a study conducted at the University of Rochester, one of the benefits of juicing ginger is fighting nausea, specifically the nausea produced by chemotherapy treatments. The patients who took ginger BEFORE their chemotherapy treatment suffered from up to 40% LESS nausea than those who did not.

This means that ginger is one of the best anti-nausea remedies around. If only we could remember to take ginger juice after a night of drinking!

Asthma is a serious disorder that affects many people around the world, but thankfully we’ve got ginger juice to deal with the problem. Many of the benefits of ginger juice lie in the zingerone, an antioxidant compound found naturally in the root.

Zingerone can help to relax the smooth muscle of your airways, stopping them from closing up or constricting during an asthma attack. If you suffer from asthma, it’s a good idea to drink ginger juice regularly in order to prevent the attacks from affecting you too much.

Ginger is one of the best remedies to take for swelling, particularly swelling caused by arthritis. The gingerols in the root are a powerful compound that can help to reduce swelling in patients suffering from both osteoarthritis (caused by wear and tear) and rheumatoid arthritis (an autoimmune disorder).

Not only can it help to reduce the swelling, it will eliminate a lot of the pain and increase mobility in those suffering from arthritis in their joints. Ginger juice is one of the most potent anti-inflammation and anti-arthritis remedies you can find.

Who doesn’t want a stronger, more active immune system? Ginger promotes sweating, which can help to get rid of toxins from your body and improve your immunity. Sweat contains a special agent that deals with germs, and an increase in sweat can deal with the germs and bacteria that could infect you.

It’s why you sweat so much when you have a fever or a cold, and it can help to deal with all sorts of infections–bacterial, viral, fungal, and microbial. With just a small piece of ginger added to your juice, you can boost your immune system and make it easier for your body to defend itself against sickness.

For all the women out there suffering from painful periods, ginger juice makes for an excellent remedy! A study involving women taking ginger capsules found that the chemical compounds in ginger helped their bodies to relax during menstruation, reducing the pain of the cramps. Drinking some ginger juice can help to ease the pains of your “time of the month”, so it’s definitely worth having the root handy as the day approaches.

Wow! So many benefits of ginger juice! Who knew that this little root could pack such a punch?

One of the best things about ginger juice is that it’s tangy and a bit sweet, so it adds a nice flavor to your juices. Plus, with all these health benefits listed above, it’s as nutritious as it is delicious!