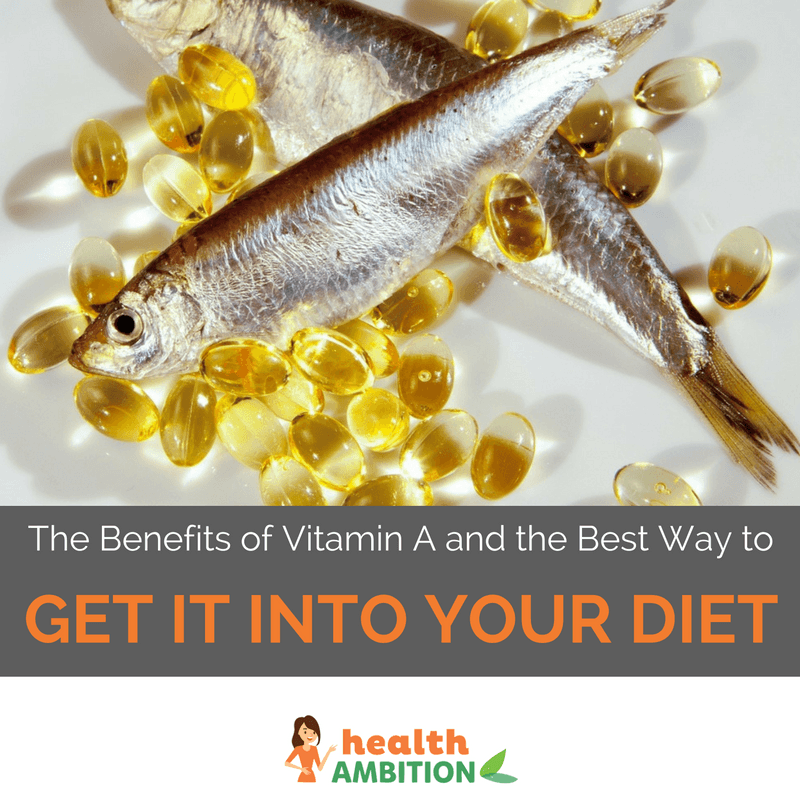 Vitamin A is one of the essential components of good health. But what makes it so important? What is the simplest and most effective way to get into your diet? And are you getting enough?

Your immune system, the health of your eyes and skin, the way your body heals itself and fight off infection and many other important physiological processes rely on vitamin A. It is involved at a cellular level with building and maintaining your body and keeping it healthy.

Chronic vitamin A deficiency is responsible for many debilitating diseases and even deaths, particularly in the developing world. It is also known to be the predominant cause of blindness around the globe.

While a serious deficiency in vitamin A is rare in developed countries like the United States, many people may be getting far from optimum levels of vitamin A in their diets. Additionally, there is another nutritional compound that you need to have good levels of as well to make the most of vitamin A’s health benefits.

What is Vitamin A?

The term vitamin A actually encompasses several fat soluble nutrients that scientists refer to as retinoids. Retinol converts into retinal and retinoic acid and these are the forms that our bodies use for cellular maintenance and other vital functions.

True vitamin A, in the form of retinol, can only be found in animal foods and is also called preformed vitamin A. However, your body also usually converts certain compounds found in plants, known as carotenoids or pro-vitamin A, into retinol and then retinal and retinoic acid.

You may have seen supplements jars refer to beta-carotene or even alpha-carotene as vitamin A, but this is actually a bit misleading. The conversion of beta-carotene into vitamin A retinol is estimated to be quite ineffective at only around 12 to 1. For alpha carotene this conversion is believed to be even less efficient at approximately 24 to 1.

Clearly you would need a lot of beta-carotene if this was to be your primary source of vitamin A. Vegetarians and particularly vegans would require a large amount of carotenoid rich foods like pumpkins, carrots, sweet potatoes and green leafy vegetables into their diets if they wanted to significantly increase their levels of vitamin A.

Alpha carotene, beta-carotene and other carotenoids are actually very beneficial antioxidants though. It could be argued that requiring them to be converted into vitamin A may be depriving your body of some of their ability to protect your calls from damaging free radicals.

There is a far better option ahead, but first let’s look at some vitamin A health benefits and why you’d want to aim for an optimal intake.

The retinoic acid form of vitamin A is one of the essential substances used to create and maintain the billions of cells in your body. It actually influences gene expression and directly affects a large number of important cellular processes.

This makes vitamin A especially important for pregnant women, babies and growing children and any serious deficiency could be particularly detrimental. Importantly though, excessive levels of synthetic vitamin A supplements should also be avoided. In the case of pregnant women, both vitamin A deficiency and overdose are linked to an increased risk of birth defects.

2. Resistance to Disease and Infection

Vitamin A helps to maintain the epithelial cells both internally (in your lungs, gastrointestinal tract and urinary system) and externally (in your skin, mucous membranes and eyes) to protect your body from infection and disease. Without this important first line of cellular defenders, your body would have little protection against viruses, bacteria and other pathogens.

Vitamin A also helps to protect your body from diseases and infections by enhancing white blood cell and antibody creation to deal with any harmful microorganisms. The risk of viral infections like pneumonia, flu and the common cold in particular is said to increase when there is an even mild deficiency in vitamin A.

It is well-known that vitamin A is essential for good vision and eye health in general. The retinal form of vitamin A is concentrated in the retina. It is needed to convert the light that enters your eyes into nerve impulses that your brain translates into the words you’re reading on the screen right now. Quite literally, you couldn’t be reading about vitamin A without vitamin A at work inside your eyes!

Retinal is also needed for the creation of the compound rhodopsin, also called visual purple, that helps your eyes to make out shapes in the dark. Night blindness is a common symptom of vitamin A deficiency and increasing your intake of vitamin A rich foods can make a big difference in how well you see when it’s dark.

The official RDA (recommended daily allowance) for women of vitamin A is set in the USA at 700 mcg or 2333 IU. For men it’s 900 mcg or 3000 IU. The vitamin A RDAs for children are lower and very depending on their age. (source)

There are some widely varying views though on whether these amounts are just enough to prevent vitamin A deficiency rather than being set for optimal health.

The US-based Food and Nutrition Board of the Institute of Medicine recommends an upper limit for adults of preformed vitamin A at daily levels of 3000 mcg or 10,000 IU. Some health therapies may use larger doses than this, but this should be monitored by a healthcare professional, particular when questionable synthetic forms of vitamin A like retinyl palmitate are used.

Vitamin A is fat soluble and can accumulate in your liver. Very large doses in the region of 25,000 IU for adults and 10,000 IU for children over long periods may be toxic.

Symptoms of chronic vitamin A overdose can include headaches, dizziness, loss of appetite, itchy skin, hair loss and blurred vision. However most people would be unlikely to reach these levels without using preformed vitamin A supplements and regularly exceeding the recommended dosage.

The majority of multivitamin supplements these days use pro-vitamin A beta-carotene rather than retinol. Beta-carotene will not be stored in excessive levels in the liver so you will not overdose on it in supplements.

The Importance of Vitamin D

The ratio of vitamin D to vitamin A in a person’s diet is very important. These two nutrients work together in vital areas like the way your body uses calcium to build strong and healthy bones.

A good ratio of vitamin D to vitamin A is often cited as a least 1 to 10, preferably 1 to 5 and some sources suggest even higher for utilizing the synergistic health benefits of both vitamins.

Unfortunately, living much of our lives indoors and eating a processed diet, many people are believed to be deficient in vitamin D. As a consequence, they also have an unbalanced ratio of vitamin D to vitamin A in their bodies that may lead to a variety of health issues. Osteoporosis and arthritis in particular are often associated with a low intake of vitamin D.

Given this, any increase in vitamin A in your diet should be matched with an increase in vitamin D, ideally at a ratio of around 5 to 1 or higher. With synthetic versions of both vitamins being called into question as to their usefulness to the body and potential toxicity issues, is there a better solution?

The Best Way to Take Vitamin A and Vitamin D

Something I’ve personally taken for the last two years now is Carlson’s lemon flavored cod liver oil. The vitamin A and D in it is in a naturally occurring in a ratio of around 2 to 1. With the other sources of vitamin A and carotenoids in my diet I feel this is a healthy ratio to have.

Unlike some other brands, this cod liver oil is extracted without the use of chemicals and is tested free of the contaminants you sadly often find in fish these days. It is also a great source of highly beneficial omega-3 fatty acids.

I consider it something of an overall health tonic that seems to have improved such widely varied aspects of my health as my eyesight, ability to concentrate for long periods, skin tone and overall immunity.

Interestingly, I can’t actually remember having a full blown cold in the last two years. If I ever feel a sore throat after being out in the rain for instance, I take an extra dose of cod liver oil and it’s gone the next day.

Other very high sources of vitamin A are beef, pig and chicken livers, but these don’t have the corresponding high levels of vitamin D.

Eggs, milk, cheese and butter are also sources of preformed vitamin A, while sweet potatoes, carrots, pumpkin and green leafy vegetables are all good sources of pro-vitamin A carotenoids. Having some healthy fats like olive oil in a meal containing these pro-vitamin A foods can help with their absorption as well.

Ideally, people would get all the health benefits of vitamin A for a range of both preformed and pro-vitamin A foods. If you think you could do with a little more though, a good natural cod liver oil with the proper ratio of vitamin D to vitamin A would have to be a far better choice than synthetic multivitamins.