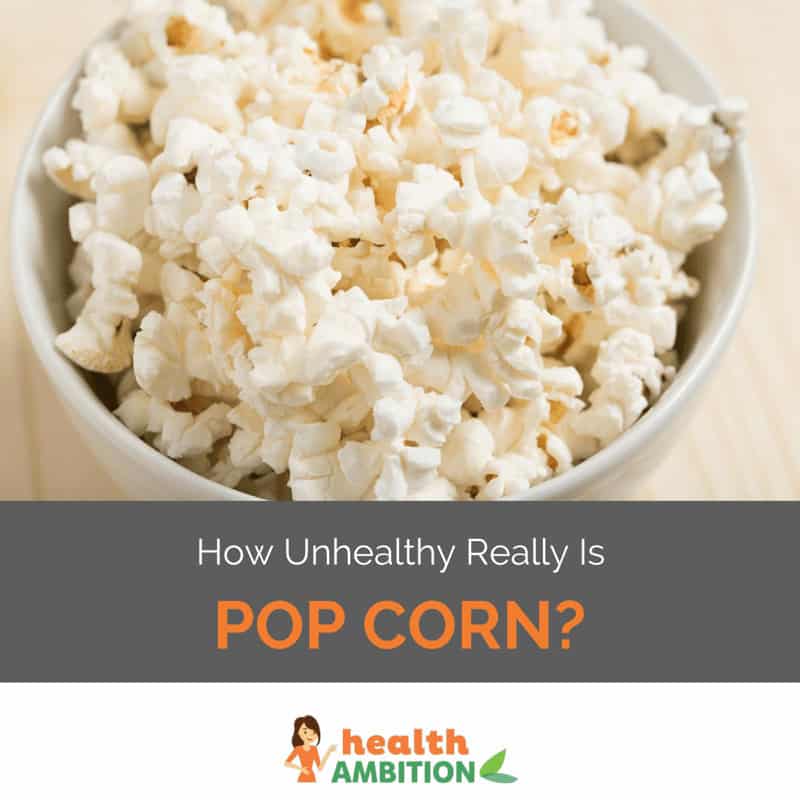 If you’re wondering is eating popcorn bad for you, I’m going to let you in on a secret. Popcorn is actually one of the healthiest (and tastiest) snacks out there. In fact, even my doctor recommended popcorn when I was suffering with a slow digestive system – I’m not gonna argue with an MD!

Now I’m sure she’s not talking about the bucket of popcorn you buy at the cinema that’s swimming in a little lake of butter and saturated with salt. But when you take away all the trimmings, popcorn is pretty amazing, nutritionally. Read on for my fact-checked analysis of popcorn.

Of course everyone knows what popcorn is. Those crunchy, chewy little clouds you eat while watching a movie. But how did they come to be? 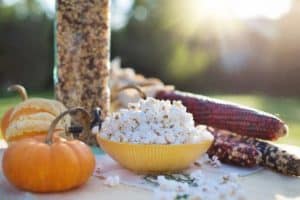 Popcorn is a variety of maize, a whole grain product. Its scientific name is Zea Mays Everta. It looks almost identical to corn-on-the-cob. The main difference is that popcorn is the only variety with kernels that can “pop”.

Popcorn seeds are selectively bred to produce desirable traits such as favourable grain color and high popping success. Most of the world’s popcorn supply is grown in a region of the midwestern USA called the “Corn Belt”. (source)

Popcorn kernels contain a small amount of oil and moisture. As they are heated, these liquids form pressurized steam. Pressure continues to build inside the hard shell and eventually reaches breaking point at 180 °C (356 °F). The “pop” sound is produced when the shell ruptures and the interior of the kernel essentially turns inside out and expands.

The oldest popcorn ever found was from New Mexico and around 5,600 years old. (source) It was also commonly used by the Aztecs, not only to eat but strings and garlands of popcorn were used as part of ceremonial costumes during festivals honoring the rain god. (source)

What’s So Great About Popcorn? 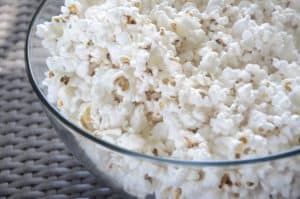 Popcorn with nothing added is a very low calorie snack. Air-popped popcorn contains around 31 calories per cup, making it a great diet food. Most other snacks are much higher in calories – a chocolate bar or bag of chips has around 250 and a banana has at least 100. (source)

If you’re on a low-fat diet, then popcorn is a safe bet. One cup contains less than 1 gram of fat. (source) However, this, along with the low protein content means that popcorn won’t really fill you up. It’s best use is to satisfy a savoury craving rather than using it as a substitute for lunch.

This is why my local doctor recommended popcorn to help boost my digestion. It can be hard to get the recommended daily allowance of fiber (anywhere between 25-35g depending on the source). Popcorn has 1.2 grams of fiber per cup so can help you reach that target without having to turn to supplements. (source)

There’s such a big buzz around whole grain foods lately – and for good reason. Their fibre content and nutritional benefits are something we should all be trying to get more of.

However, the whole grain versions of basics like bread, flour or cereals can often be quite a bit more expensive than the original. Not only is a bag of plain popcorn kernels super cheap, it’s a 100% unprocessed whole grain. (source)

5. It Contains Plenty of Antioxidants 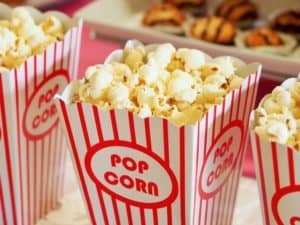 Another buzz-word in the nutrition world is “antioxidant”. Their exact benefits haven’t been pinned down yet but research is promising – pointing towards prevention of cancer and heart disease. A group of researchers in the University of Scranton showed that that popcorn contains more antioxidant polyphenols than many other whole grain foods, fruits or vegetables. (source)

If you or a family member suffers from Coeliac disease or just prefer a gluten-free lifestyle, popcorn is a safe snack.

Plain, air-popped popcorn contains no cholesterol, no sodium and no sugar. This means it’s a good choice for diabetics or those suffering from hypertension – as long as you don’t add any fatty or salty seasonings. I’ll share some healthy popcorn recipes further on.

9. It Contains Trace Amounts of Vitamins and Minerals

It seems like the one thing that popcorn doesn’t have going for it is it’s vitamin and mineral content. There’s a little bit of everything but not enough to make much of an impression on your recommended daily allowances.

When is Eating Popcorn Bad For You?

I’ve given you 9 reasons why eating popcorn is good for you, but don’t go wild with it just yet. You need to be sensible when you’re deciding how to eat your popcorn as there are a number of extremely unhealthy options. 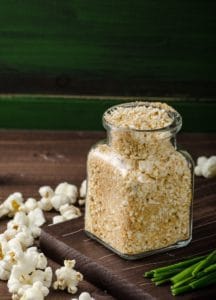 Popcorn itself is very healthy but if you slather it in butter, salt or sugar, it’s going to do some damage. The same could be said for broccoli or any other innocent vegetable. Consuming bucket-loads of popcorn like those found in movie theaters is also a bad idea. A reasonable portion size is one or two cups.

Talking about movie theater popcorn, it’s typically popped in coconut oil. A large portion can have up to 60 grams of fat! A tablespoon of butter adds 102 calories and a 1/4 teaspoon of salt adds 600 mg of sodium. Your daily sodium limit is 1,500 mg daily so being heavy-handed with the salt shaker puts your heart at risk. (source)

You might think you’re being healthier by preparing popcorn at home but pre-packaged microwave popcorn has its disadvantages too. Recently I learned that a compound called diacetyl used in “artificial butter flavoring” can cause lung disease.

The bag in which you cook it is most likely coated with PFCs (perfluorinated compounds), chemicals that suppress immune function in children and cause cancer in animals. (source) As if that wasn’t bad enough, many microwave popcorn brands contain trans fats which increase your levels of “bad” cholesterol. (source)

Does It Matter How You Cook Popcorn?

From what I’ve said above, it’s clear that it does matter how you cook your popcorn. By far the best method is air popping. This is simple and you can do it at home with just a paper bag and a microwave. (source) 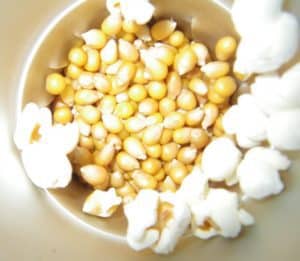 To make air-popped popcorn, add 3 – 4 tablespoons of plain kernels to a brown paper bag. Fold the top of the bag twice and microwave for about 2 minutes, or until the popping slows significantly. (source) If you eat a lot of popcorn you might want to invest in a dedicated air popper.

The next best method is to cook your popcorn at home in a pot. You will need to add a little oil but a light spray of olive oil isn’t that bad. Simply put enough kernels to coat the bottom of the pot, spray with oil, put the lid on and set the heat to medium. Shake the pot regularly to stop the kernels burning and it’s ready when the popping has almost stopped.

If plain popcorn is a bit too boring for your taste, here are some healthy alternatives to traditional seasonings:

I always have a bag of plain popcorn kernels in my cupboard – they are so cheap and last forever. It only takes minutes to prepare a fresh healthy snack when the craving strikes. I hope this article has helped answer your question – “is eating popcorn bad for you”. It’s most certainly good for you and I really recommend it!

2 thoughts on “Is Eating Popcorn Bad For You? A Fact-Checked Analysis”