Goji berries are native to Asia where they have been used for various purposes over thousands of years. They have been referenced in ancient Chinese texts dating back to the first century AD.

In ancient China, goji berries have been linked with long life, beauty and vitality. These berries were praised for revitalizing the skin, strengthening the muscles and tendons and protecting from illness.

So how many of the reported health benefits of goji berries are supported by scientific research? In this article, we’ll find out everything you need to know. What’s in a goji berry? What can they do for our health – and is it all good news?

What Are Goji Berries?

Goji berries, also known as wolfberries, are the fruit of one of two species of the boxthorn plant, which, along with potatoes, eggplants and tomatoes, are members of the nightshade plant family.

The berries themselves are a bright orange red color when mature, and grow to around 1 – 2 cm. The fruit contains between twelve and fifty tiny yellow edible seeds.

The raw fruit is not often consumed due to the bitter taste and potential toxicity. People generally consume the dried fruit which tastes sour with a slight medicinal or herb-like bitterness and a sweet aftertaste.

Despite their small size, goji berries are quite a knockout in the nutrition department. They are packed with vitamins, minerals and other nutrients, including eight of the essential amino acids.

A 100g serving of goji berries provides almost 900 percent each of the vitamin A and C we need each day, 85 percent of our iron, 19 percent of the required calcium and 34 percent of our ideal daily intake of dietary fiber. (source)

Goji berries also contain a wide variety of other phytochemical compounds designed to give the plant flavor, scent and color in addition to protection from insects and UV damage. These phytochemicals have been shown to have numerous positive effects in the body.

Research has identified a number of different phytonutrients in goji berries, including carotenoids like beta-carotene, zeaxanthin and cryptoxanthin and flavonoids such as quercetin, kaempferol, myricetin, hesperidin and rutin. (source) 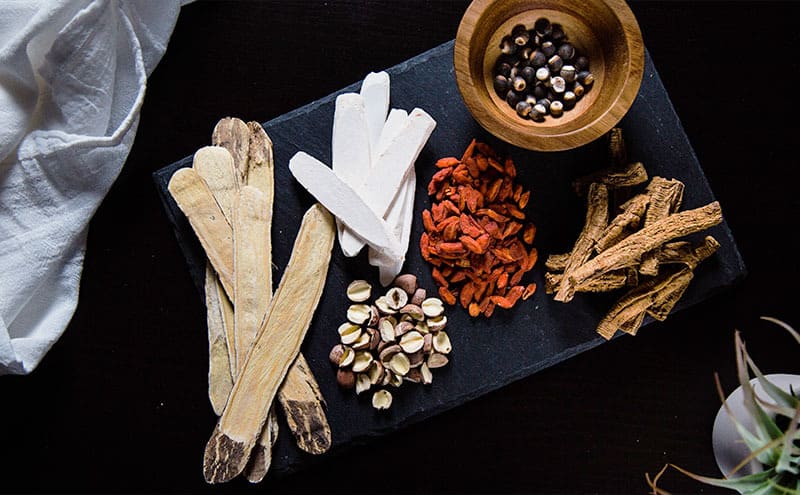 The combined effect of all of these nutrients is a powerful helping hand when it comes to health. Here’s what the research says about the benefits of goji berries:

The vitamins and many of the phytonutrients in goji berries make them stand out from the crowd as far as antioxidants are concerned. They may not have the strength of blueberries – the berry antioxidant champion – but they are a great source of a wide range of different varieties.

Antioxidants help to give the immune system a boost and protect the body from free radical damage.

The immune system is our own personal army to deal with invaders. It provides us with daily protection and is key to our daily battle for survival against bacteria, viruses and other threats to health.

The high content of vitamins A and C in goji berries is key to building immunity. These two nutrients are vital in preventing common illnesses like a cold, protecting eye health and reducing the risk of more serious chronic diseases like cancer or neurodegenerative decline.

Inflammation has an important role to play as part of the body’s immediate response to an acute injury or illness. However, chronic or long-term inflammation can do more harm than good; it has been highlighted as a feature of cardiovascular disease, diabetes, arthritis, many cancers and nervous system disorders.

Conclusions from some research studies suggest that goji berries have a significant anti-inflammatory action which contributes to the effectiveness of the antioxidant activity and cellular protection associated with goji berry plant compounds. (source)

While many different phytochemicals have been identified in goji berries, not all of these compounds have been extensively researched to date.

There are, however, some studies that indicate zeaxanthin and vitamin C help the body to fight cancer cells. One research trial observed the significantly positive effect of goji berries in inhibiting tumor growth and other anti-cancer effects, including cancer cell death. (source) 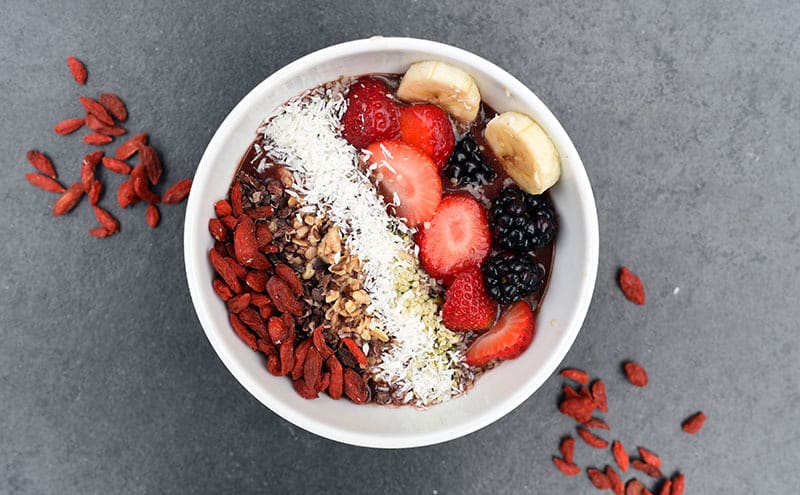 Maintaining blood sugar levels to within normal range is important for everyone, but especially for people with diabetes. Keeping blood sugar in check helps avoid a number of health complications including insulin resistance – a need for excessive insulin production.

During digestion, goji berries slowly release their sugar into the bloodstream, preventing blood sugar spikes and dips. Some studies indicate that gojis have significant hypoglycemic effects and increase our sensitivity to insulin by increasing glucose responsiveness

As part of a healthy diet goji berries are a very good choice for those with trouble balancing blood glucose levels. (source)

As pilot and central controller, pretty much nothing else works without the brain – it’s an extremely complex and amazing structure. Research suggests goji berries have a protective effect on neurons, preventing injury and potentially decreasing the symptoms of Alzheimer’s disease.

They have also been linked with enhanced learning and memory skills by increasing the number of nerve cells produced in the hippocampus – the part of the brain involved in producing memories, learning, emotions and motivation. (source)

The liver is an extremely busy organ, carrying out a 24-hour blood filtering and quality assurance service, nutrient storage facility and a toxic waste removal plant all in one convenient package.

To function effectively, the liver needs regular doses of vitamins A and C, plus iron and other nutrients. So we know that the goji berry is a great source of high levels of liver loving nutrients. (source)

Other research also suggests some of the compounds in goji berries offer a protective liver function. One such study indicated that they provided a significant level of protection in liver tissue, particularly in respect of processing of toxic substances. (source)

As with many other fruit and vegetables, goji berries are loaded with beta-carotene, an antioxidant which helps promote healthy skin and has been linked to the prevention of skin cancer.

Clinical trials using non-human subjects have shown the goji berry juice offers significant protection against skin disorders and reduction in skin damage due to UV light. Two particular antioxidants found in goji berries have been identified as having such protective properties. (source) 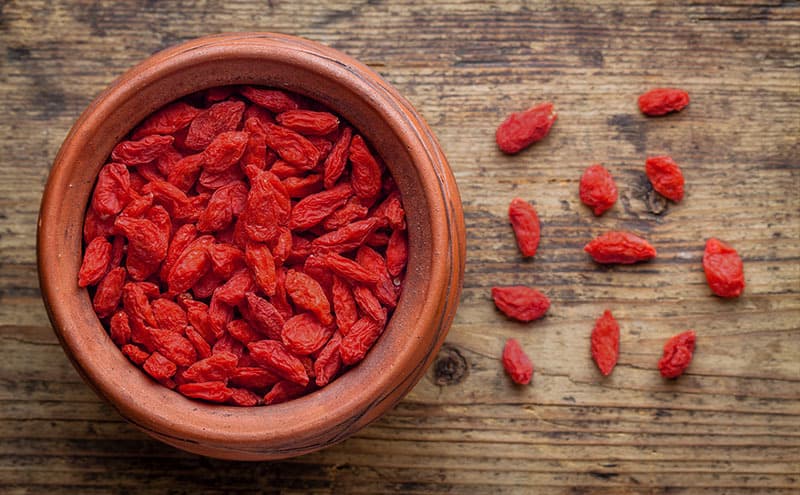 Yet another positive effect of the goji berry antioxidant army is the ability to protect eyes from conditions such as macular degeneration, an age-related disease and the most common cause of blindness in older adults.

The antioxidants help stop eye damage which results from exposure to UV light and free radical chemicals, and so is naturally beneficial for vision.

A daily dose of goji berry juice has been observed in research studies to significantly increase antioxidant levels, provide protection against hypopigmentation and other diseases affecting the macula, and protect the retina from conditions such as glaucoma. (source)

When it comes to feeling good, goji berries have been shown to help with this. Studies have indicated that drinking a daily dose of goji juice can have a noticeable effect in improving the mood state of participants, increase energy levels and general level of well-being.

It seems goji berries can help you feel good outside and inside, as the participants also reported feeling less stress and fatigue, and experienced improved gastrointestinal function compared to those who did not consume goji juice. (source)

Goji berries also come with another added bonus. They have been found to increase the quality, quantity and movement of sperm, as well as protecting the testes – where sperm is produced – from damage by toxins present in the body.

Other studies indicate improved sexual ability and reduced erectile dysfunction when goji juice was administered to non-human subjects. So regular inclusion of goji berries in a male diet may have a significantly positive impact on sexual health and fertility. (source)

Goji berries are a great source of dietary fiber, which slows down the digestive process, keeping us feeling fuller for longer, and providing a prebiotic food source for the good bacteria in the gut.

In this way, it is likely that goji berries are likely to be helpful inclusion on a weight loss plan, and may explain reports of improved function of the gastrointestinal system. (source) 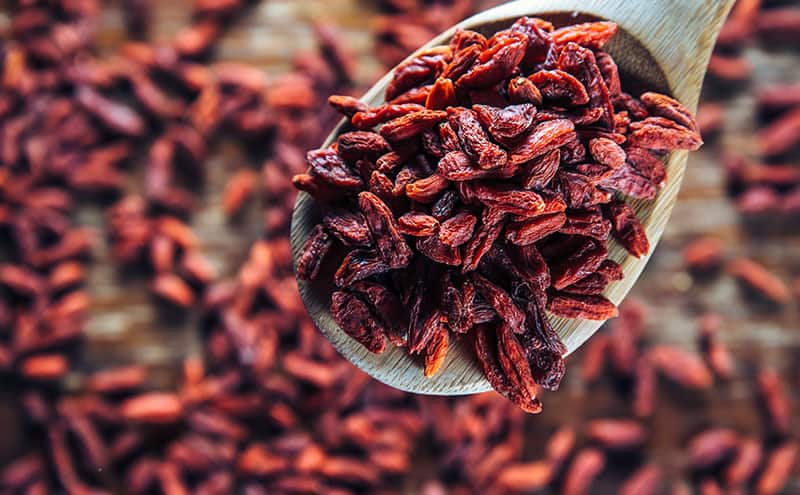 When Goji Berries Aren’t Good For You

As a member of the same plant family as the deadly nightshade, goji berries contain a toxin known as solanine.

While this does not pose a problem to the majority of the population in small amounts, this glycol-alkaloid toxin means some people should be cautious about consuming goji berries.

Patients taking warfarin and other anticoagulant medications are advised not to consume goji berries or goji berry juice as it will increase the risk of bleeding.

Caution should also be taken with antihypertensive medication, as goji berries may reduce blood pressure, which could result in blood pressure dropping too low.

There have been a few rare cases of a negative reaction in people who take diabetic medication after consuming a lot of goji berries. Reports of allergic reactions to goji berries are uncommon.

Goji berries and juice should be avoiding during pregnancy, since they contain a substance called betaine which has been linked to higher risk of miscarriage.

As is the case with all dried fruit, portion control is important. Goji berries, while healthy, and contain only 23 calories in a 28 gram serving, they do contain some sugar and it can be easy to overdo it!

What Do You Do With Goji Berries?

As a tart but sweet ingredient, goji berries lend themselves well to a variety of sweet and savory dishes.

The dried fruit can be enjoyed as a lone mid-afternoon snack or rehydrated for a few hours to restore their plumpness and reduce the bitterness.

They can be added to a trail mix or fruit salad, mixed into pilau rice, risottos, stews and soups, brewed with hot water to make a tea or blended into a smoothie. They work well in cookies and flapjacks, sweet and savory breads and muffins – they are exceptionally versatile.

As with cranberries, goji berries are excellent as a sauce or chutney to accompany meat like pork and turkey.

Final Thoughts on Goji Berries Benefits and Side Effects

Goji berries bring with them a whole host of health boosting properties.

Goji berries are right up there with the high rollers when it comes to antioxidants, providing the immune system with plenty of ammunition for zapping those free radicals, and some helpful anti-inflammatory action too.

The plant compounds in goji berries can potentially have a positive effect in some cancers, help control blood sugar, improve brain function, protect the liver and heart…the list of benefits seems endless.

There are some people who should avoid or carefully monitor their consumption of goji berries, but as a rule they are very healthy addition to most diets.