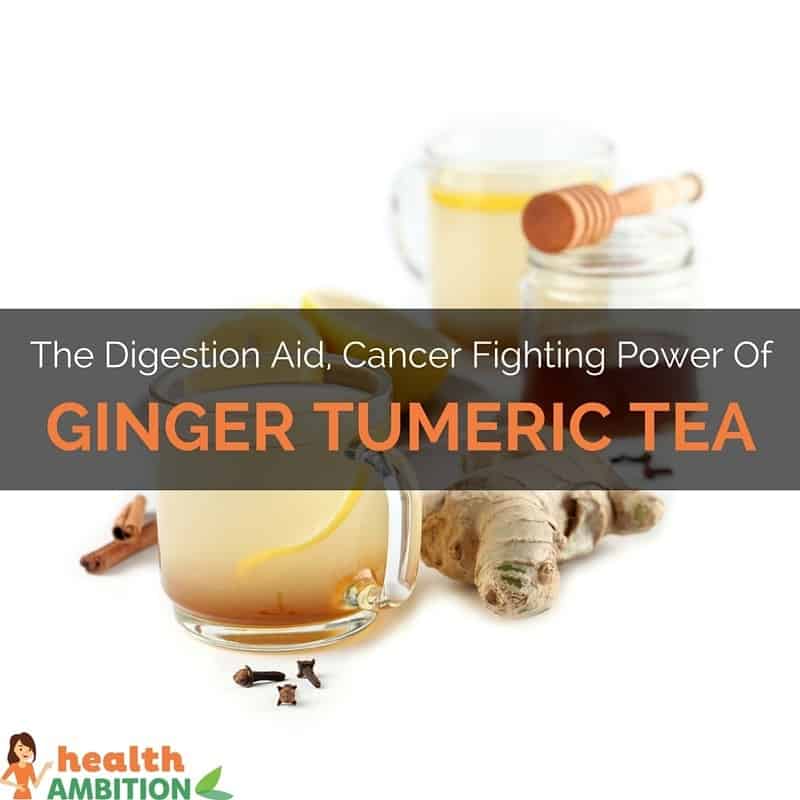 One of my favourite sayings is “let food be your medicine”. I’m a bit of a fanatic when it comes to tea, I’ve got more boxes of it in my cupboard than I’ll probably ever get around to drinking. I love it hot on chilly winter evenings and as refreshing iced tea from the fridge in summer. One drink with medicinal properties that’s on my regular roster is ginger turmeric tea.

Not only does it taste delicious – sweet and spicy – but it has some pretty impressive medicinal properties. I’ve summarized the health benefits of ginger turmeric tea for you in this article. I think once you read about it, you too will be convinced to drink a cup every day! 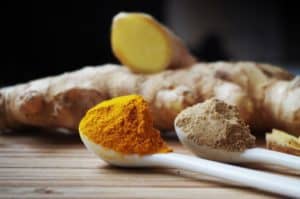 Ginger is a flowering plant native to Southern Asia. It’s the root that you’re most likely familiar with – it’s often used as a flavouring in food and a traditional remedy. Ginger has a hot and spicy taste used in recipes across the world – from Indian chai masala to a palate-cleansing sushi accompaniment in Japan.

Ginger’s most-known medicinal use is as a folk remedy is for for nausea, diarrhoea and gas. I give my kids ginger candy to relieve their travel-sickness on road trips and it seems to work well. It has also been used as a treatment for colds and respiratory symptoms. (sources 1, 2)

Turmeric is a herbaceous perennial plant in the ginger family. It’s native to India and the root is a common component of Indian cooking – especially in curries. The root is boiled, dried and ground into a yellow-orange spice powder before use. It has an earthy, peppery flavour.

It has been used as a dye due to its strong pigmentation but the most famous use is as a traditional health remedy. Turmeric is part of the ceremony in Indian wedding culture to soften the skin. In Ayurvedic remedies, turmeric treats indigestion, colds, liver ailments and skin sores. (sources 1, 2)

Not only are ginger and turmeric great on their own, but they actually work better together. Like many natural substances, the different phytochemicals present interact with each other for increased potency. Compounds called gingerols in ginger act as bioenhancers (source). This means that they help your digestive system absorb other compounds. Since the main active component of turmeric – curcumin – is poorly absorbed on its own, it’s likely that consuming it with ginger helps the process along.

1. It May Increase Lifespan

Let’s start with the most impressive claim, shall we? A study in fruit flies (I know, not exactly similar to humans but they’re frequently used because of their short lifespan to study generational changes) showed that the compound curcumin in turmeric increased lifespan significantly. (source)

2. It Has Anti-Inflammatory Properties

A study in the journal Oncogene compared the anti-inflammatory power of turmeric with conventional drugs ibuprofen and aspirin. It was found to be stronger and with fewer side effects. (source) Ginger has also been used to treat inflammatory conditions such as arthritis and ulcerative colitis. (source)

A study measured this effect and found that curcumin “significantly reduced” signs of inflammation in rheumatoid arthritis. It may even prevent arthritis from developing in the first place. (source) If you suffer from chronic inflammation, drinking a cup of ginger turmeric tea every day is a great idea.

3. It Can Help Manage Diabetes

Turmeric has an effect on blood sugar and insulin. One study found that its blood sugar-lowering abilities are much stronger than a common antidiabetic drug. If you’re already taking a medicine for diabetes, check with your doctor before adding ginger turmeric tea to your routine. (source)

4. It Has Anti-Cancer Properties

So many foods on the market these days claim to have anti-cancer powers as a selling point. But the science backs this claim up when it comes to ginger turmeric tea. A study published in the British Journal of Cancer found that ginger and turmeric extracts had the ability to inhibit the growth of cancerous tumors.

Ginger has shown to be useful for women suffering from ovarian cancer whereas turmeric may work against bladder and lung cancer. Both plants have antioxidant properties that may be responsible for these effects. (sources 1, 2, 3)

A study in animals showed that turmeric can increase neural stem cell growth in the brain – an important factor for self-repair. Other research showed that curcumin in turmeric may slow buildup of beta-amyloids – destructive substances involved in the brains of those with Alzheimer’s patients. It also helps with inflammation in the brain in Alzheimer’s. (source)

6. It Aids Digestion, Nausea and Vomiting

Most of us have heard of ginger to relieve motion sickness or upset stomach. This effect has been attributed to the compounds shogaol and gingerol present in the root. (source) Ginger relaxes your gut muscles allowing food to move smoothly through your digestive system. (source)

Turmeric may help with indigestion – reducing symptoms such as bloating and gas. (source)

Ginger helps prevent blood clots, which are involved in stroke and heart attack. Be careful though, if you’re taking any medicines for this it can be a major interaction. Check with your doctor if this is the case. (source)

Curcumin in turmeric also has the power to lower your cholesterol! It’s been suggested that taking turmeric along with anti-cholesterol medicines such as statins leads to an enhanced effect. (source)

The Journal of Microbiology and Antimicrobials compared ginger’s antibacterial ability with that of common antibiotics. It was found that ginger had more power to kill staphylococcus aureus and streptococcus pyogenes than conventional drugs. Curcumin is one of the strongest herbal antifungals too – more potent than ginger, clove and oregano. (source)

A study in India tested curcumin in 60 volunteers with major depressive disorder. It was found to have similar efficacy to the drug Prozac, without the unpleasant side effects. (source)

Turmeric has been used as a traditional remedy for skin conditions for years. Its antibacterial properties make it helpful for acne and the anti inflammatory properties ease redness and irritation. As well as drinking it in your tea, why not use some turmeric to make a natural face mask? (source) 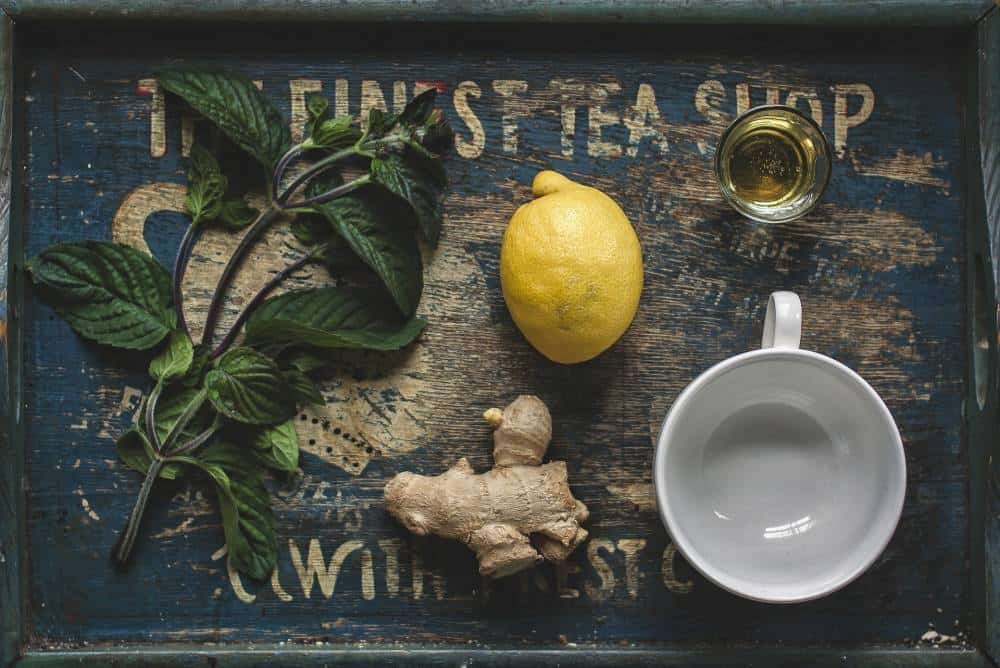 Heat the water (not boiling) and slowly add it to the turmeric and ginger in a cup, making a paste at first. When the tea is thoroughly mixed, add honey or stevia to sweeten. You will need to stir this before drink as the ginger will settle to the bottom. (source)

Put the cup of almond milk into a pot and heat it over the hob. Add a small amount of milk to the turmeric, ginger and sweetener and mix until there are no lumps present. Then add the rest of the milk. (source) 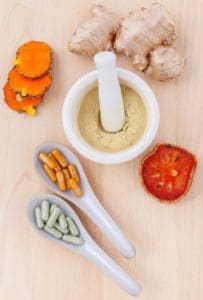 Because the components of this tea have such potent medical properties, it follows that they can interact with prescription drugs in a similar manner. If you take a regular medicine or have an ongoing health condition, check with your doctor or pharmacist before taking ginger turmeric tea. If you are taking blood thinners, you must avoid ginger and turmeric completely.

I was really blown away by the amount of hard scientific evidence supporting the health benefits of ginger turmeric tea. I think it’s worth drinking regularly for these effects, and the delicious flavour. I recommend it to all my friends and hope you enjoy it too!

3 thoughts on “The Health Benefits of Ginger Turmeric Tea”