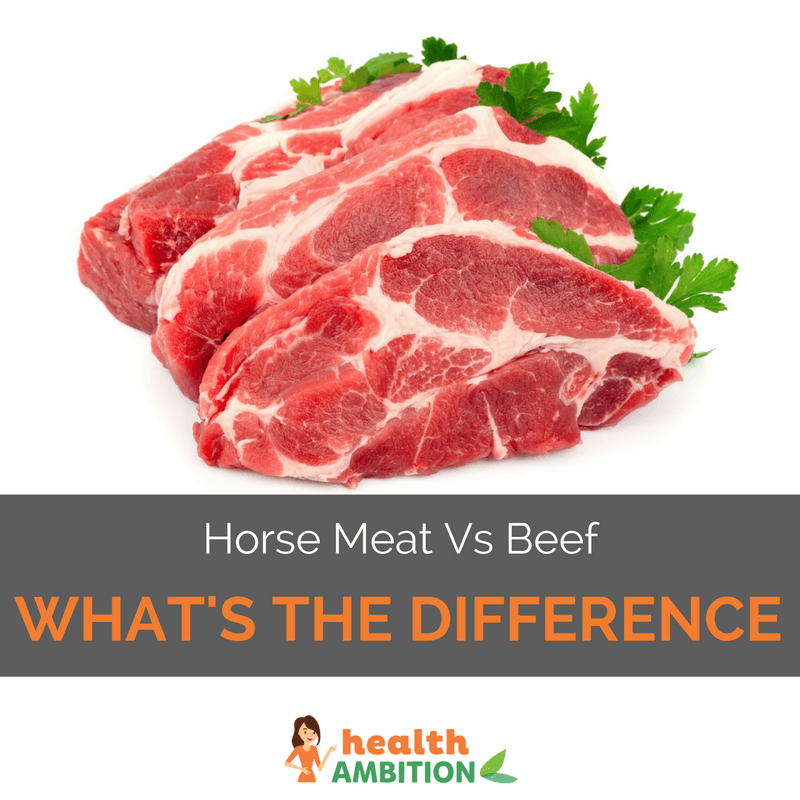 In one of the bigger food related stories of early 2013, it was reported that horse meat was found in processed meat products labelled as beef in Irish and British supermarkets. In some cases, the amount of horse meat substituted for beef was as much as 100%.

While it’s clearly deceptive for food companies to label a product one thing when it’s actually another, this page will explore what the difference is between beef and horse meat nutritionally.

The ethics of horse meat consumption is a personal matter. And though it’s definitely one you should have a choice in, if you choose to eat cheap processed ‘meat’, it could be argued that you’re not really that concerned with what you’re eating anyway. You’ll see why ahead.

For now, even though it may be distasteful to some, what are the actual nutritional differences between beef and horse meat (assuming just this time that they really are what they are labelled as)?

The Nutritional Value of Horse Meat vs Beef

According to nutritional data, 100 grams of cooked horse meat contains 175 calories, with 55 of those calories coming from fat.

While you may be able to find processed beef products with less than 30% fat, unless they are specifically labelled (and we’ve seen just how well that works) the fat percentage can be even higher.

Horse meat is listed to be containing only 6 grams of fat per hundred grams, 2 grams of saturated fat and 64 mg of cholesterol. It’s not surprising, with most horses eating more grass than processed grain pellets, that their meat would be relatively low-fat.

Ground beef is listed as having 18 grams of fat in total, with 7 grams of saturated fat and 1 gram of trans fat. Total cholesterol is 82 mg.

Intensive cattle production uses lots of fattening grain pellets as the primary feed and often synthetic hormones to speed up the animal’s weight gain.Cattle fed grain as their main diet will always be much higher in fat compared to those that are grass fed.

The protein content of horse meat is around 28 grams per 100 grams, making this a high protein food.

Ground beef is comparable, though a little lower, with 25 grams per 100 gram serving.

The levels of certain vitamins and mineral in horse meat are quite high. It is a particularly rich source of iron and it also has good amounts of the minerals zinc, selenium and phosphorus and of the B vitamins niacin, B6 and B12.

Ground beef is also considered a good source of iron, though it is significantly lower than horse meat, with less than half the content. Zinc and selenium are higher in ground beef though and it also contains a good concentration of most of the B vitamins.

Should You Eat Horse?

While at truly insignificant levels compared to beef consumption, horse meat is eaten in many European countries like France, Germany and Italy. In specialty butchers across Europe you can find meat from horses sold alongside other more commonly known animal foods.

So should you eat horse meat? If you don’t personally have any moral objections to eating horse and you can find it humanely slaughtered in one of these specialty butchers, then I think the nutritional information on horse meat above has shown it is actually healthier than regular beef.

Unfortunately, horse meat’s nutritional value and what you actually end up with in the vast majority of processed meat products are two completely different things.

The Problem with Processed Meat

The recent horse meat scandal has provided some interesting insights into the way food companies source their processed meat. The horse meat found in the UK and Irish ready meals was originally sourced in Romania and Poland by a Dutch company (this Wikipedia article has the whole twisted tale) and tracing the source of the various different animal parts in a product can be difficult.

A more significant problem though is the potentially dangerous additives used in the manufacture of processed meat products, particularly sodium nitrite which can lead to the creation of carcinogenic substances.

In 2012, the World Cancer Research Fund released a review of over 7000 studies into the dietary causes of cancer. The report said ‘eating even a small amount of processed meats on a regular basis increases our bowel cancer risk’. And on the routinely used additive sodium nitrite, that it can ‘damage the DNA in our cells’.

Another study by the University of Hawaii concluded that regular processed meat consumption increases your risk of pancreatic cancer by 67%. And diabetes researchers at Harvard University have discovered the compounds like nitrites and nitrates in processed meat interfere with the proper secretion of insulin and increase your risk of developing diabetes.

Processed meat has other health issues worth considering too, such as the amount of actual meat in it. Off cuts of the slaughtered carcass that cannot be sold in any other form are generally used and many of us wouldn’t really recognise what’s ground up to make these products as real meat.

In fact, the horse meat found in the frozen ‘beef’ lasagne and ‘beef’ pasta products would have almost certainly been by far and away the highest quality meat in the mix.

Here’s an interesting video on red vs white meat.

If you really are concerned about what you’re eating, you might want to look into just how processed meat is actually made. Many nutritional experts would say whether it is beef or horse meat is the least of your problems if you are eating processed meat regularly.

13 thoughts on “Horse Meat Vs Beef – What’s the Difference and Should We Be Eating It?”