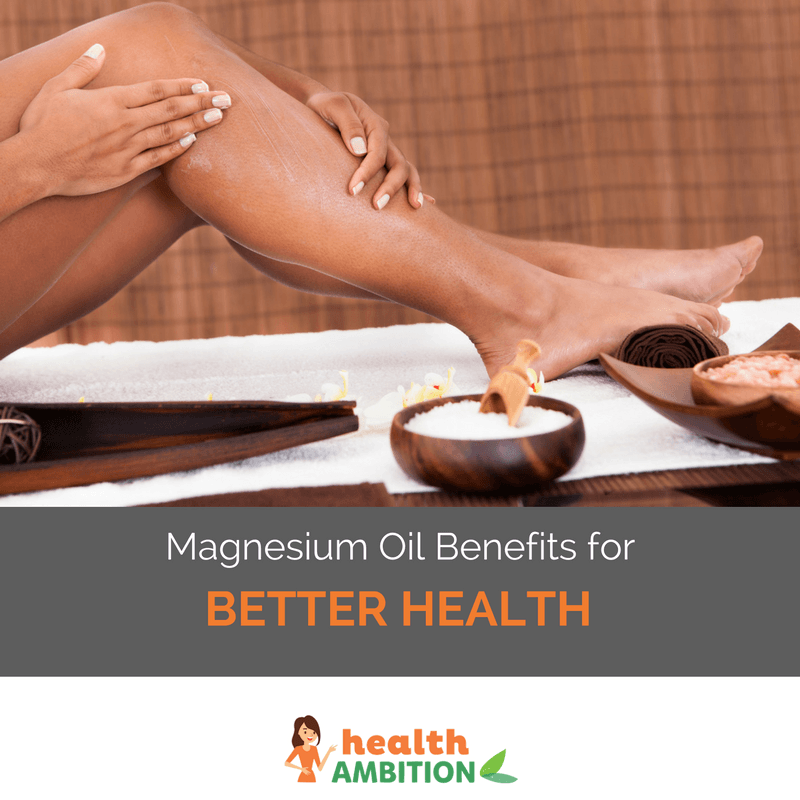 The mineral magnesium is an essential element of good health, yet so many of us are deficient in it and paying the price physically. Here is how using magnesium oil benefits your body and could be the answer to many common health problems.

Why Is Magnesium so Important

Magnesium is involved in energy production, detoxification and protein synthesis. It keeps your heart beating regularly and your muscles and nervous system working properly. It supports a healthy immune system, regulates blood sugar levels and helps to maintain strong bones and healthy teeth.

You can read more about all the of the various health problems that magnesium can help with here. For this page on the benefits of magnesium oil, I’ll simply say that there’s over 300 identified biological processes within your body the rely on adequate levels of magnesium for optimal function. This is one element of your nutritional intake that you really want to get right.

Magnesium is a vitally important mineral for good health and particularly affects your energy and stress levels. Unfortunately, if you eat a standard processed food diet, it’s also the mineral you’re most likely to be deficient in.

This report, published by the World Health Organization, estimates that around three quarters of people in the United States have a diet that is deficient in magnesium. It’s a similar picture in many other Western countries like Canada, France and the United Kingdom.

This is even more concerning when many medical experts consider the US RDA of magnesium (currently set at 320mg for women and 420 mg for men per day) to possibly be inadequate to prevent magnesium deficiencies that lead to chronic disease.

Perhaps 100 years ago the foods people regularly ate supplied more than enough magnesium naturally. Today modern farming practices strip the soils of magnesium and our drinking water is depleted of important minerals. In fact, it’s estimated that our food and water now contain less than half the magnesium they did a century ago.

Add to this the high levels of sugar, caffeine and alcohol in many people’s diets, all known magnesium antagonists, and it’s not hard to see why so many people are deficient in magnesium.

Transdermal magnesium oil is a concentrated solution of magnesium chloride that can be applied to the skin for maximum magnesium absorption. The best quality magnesium oil comes from the ancient Zechstein Sea in northern Europe and is completely free of modern day contaminants.

Oral magnesium supplements are recognized as generally having a poor absorption rate, with some forms estimated to be assimilated at less than 4%. They may also cause diarrhea and other gastrointestinal problems at larger doses.

How to Apply Magnesium Oil for Better Health

Ancient Minerals magnesium oil is an extremely pure solution of magnesium chloride and other valuable trace minerals, sourced from the Zechstein Sea.

When using magnesium all for the first time it’s best to start off with just one or two sprays into a cupped hand. Bob your hands together and then applied to both your legs. The solution isn’t really an oil, but it is slippery and you should be able to spread it easily.

There may be a bit of a stinging the first few times you use it. I remember the first time I use magnesium oil I was a little too eager to try it and spread several sprays across my chest. I definitely recommend avoiding sensitive body parts like nipples when you first start!

As long as you avoid mucous membranes and sensitive areas like the face, this stinging should diminish after a few applications. As your skin’s tolerance for magnesium oil increases, it’s beneficial to increase the application dosage, perhaps an extra spray each week until you reach around eight sprays.

Eight sprays of magnesium oil delivers around 100 mg of beneficial magnesium onto the skin for your body to absorb. Let’s have a look at some of the best ways to increase the amount of magnesium you get from magnesium oil.

Once you’ve used magnesium oil on larger body parts like legs, arms, belly and back for a few weeks, I’d suggest experimenting with these more advanced magnesium oil applications. There’s a greater chance of them stinging a little due to the areas involved, but they are also likely to increase magnesium chloride absorption rate as well.

I often spray on magnesium oil right before gym. Warm and perspiring skin is believed to increase transdermal absorption and, as an added bonus, magnesium oil may help prevent sporting injuries.

Some resources recommend applying magnesium oil straight after exercise. This would also be beneficial but it should stay on the skin for at least 20 minutes. I like a shower straight after gym so I use it before.

2. Have a Magnesium Oil Bath or Foot Soak

Soak in this, ideally for around 30 minutes, for an extremely relaxing way to receive the health benefits of extra magnesium.

3. Spray Magnesium Oil Under the Armpits

This may not be a great idea for women who shave their armpits, since this would increase sensitivity and the chances of irritation. However, the skin of the armpits is considered especially good for transdermal application. There are many reports of using magnesium oil this way to greatly diminished under arm odor as well.

If you think magnesium oil applied under the armpits could be too sensitive, you could try other areas of the body with thinner patches of skin, like behind the knees or particularly the inner arms opposite the elbows.

4. Use Magnesium Oil as a Mouthwash or Even Brush Your Teeth With It

Magnesium chloride is said to be very good for oral health and it would also be absorbed well sublingually beneath the tongue. Several sprays of magnesium oil held in the mouth and under the tongue for several minutes is especially recommended for people with magnesium deficiencies, in conjunction with all of the other magnesium oil benefits topically.

Here’s a video showing how to make magnesium oil!

With an estimated three quarters of Americans having an insufficient intake of this vital mineral, magnesium oil is a simple and effective solution for correcting magnesium deficiency and related health problems and disorders.

I’ve used this magnesium oil for many years and consider it an essential part of my health regime. I’d be very interested to hear from other people who have experienced similar magnesium oil benefits for themselves, or any questions you might have about using it.