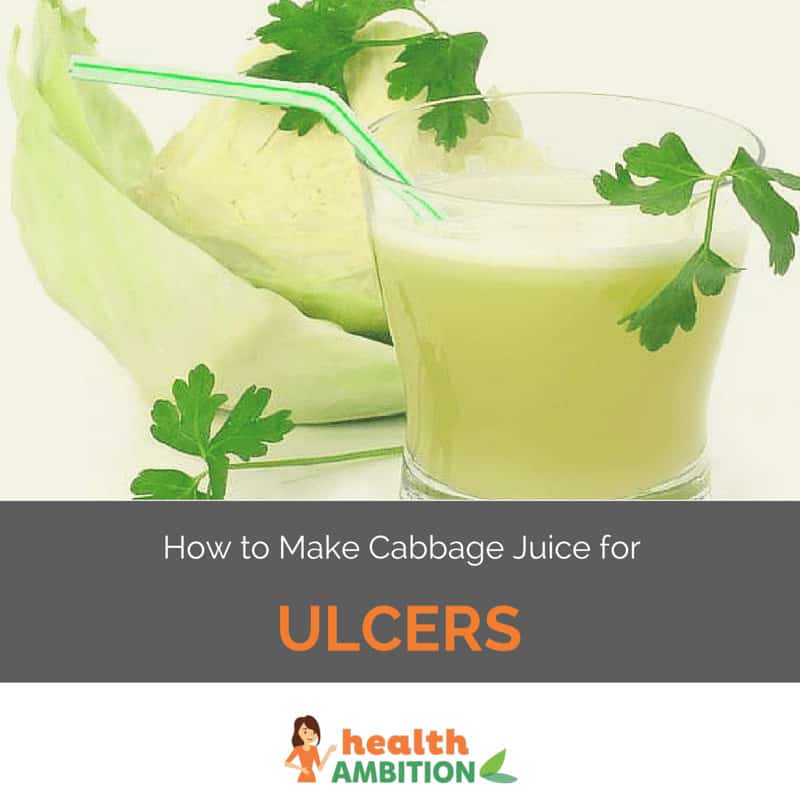 Cabbage juice probably doesn’t sound like the best tasting drink in the world, but it has many health benefits and is a potent medicine for ulcers. Here’s why.

Cabbage Juice as an Ulcer Treatment

Freshly made cabbage juice is a long-standing home remedy for peptic ulcers. Several medical studies like this one found raw cabbage juice, administered daily to patients with ulcers, provided “rapid relief from the symptoms” and that “ulcer crater healing time (was) considerably shorter than in groups of cases…in which ‘standard’ types of diet and drug therapy were employed.”

Powerful substances in cabbage juice including L-glutamine, S-methylmethionine, glucosinolates and gefarnate protect and help heal the mucous membranes lining of your stomach and digestive tract.

Cabbage juice is rich in the amino acid glutamine. This natural source of glutamine is believed to be superior to commercial antacids for treating ulcers for the way it nourishes and repairs the gastrointestinal lining.

S-methylmethionine, sometimes known as vitamin U or ulcer healing factor, is found in good levels in fresh cabbage juice. It is also said to have a protective effect on your liver, particularly from acetaminophen (Tylenol) liver damage.

Glucosinolates in cabbage are converted to anti-inflammatory isothiocyanates in your body. These beneficial compounds control the Helicobacter pylori bacteria inside your stomach that contribute to peptic ulcers. In this way, a glass of fresh cabbage juice can be especially good for ulcer prevention.

Juiced cabbage also contains good amounts of gefarnate, a substance known to protect the lining of your stomach from damage. Gefarnate has actually been isolated and used as a pharmaceutical treatment, but making your own cabbage juice is a simple way to get a good dose of it for ulcers and other digestive disorders.

How to Make Raw Cabbage Juice

Like most vegetables, cabbage is best juiced with a masticating juicer. If you’re juicing it regularly, as you will be if you’re using cabbage juice as an ulcer treatment, then you’ll get much more juice from it and other veggies with a better quality juicer compared to basic versions.

Cabbage isn’t generally considered a high pesticide load crop, but it is still better to soak it in warm water and a splash of apple cider vinegar in a big bowl if possible before juicing to clean it.

To begin, chop the stem off your cabbage and then chop it in half. Next slice the half just wide enough to fit through your juicer feed. Generally half a cabbage is a good starting amount to juice.

I like to combine cabbage juice with other complementary vegetables as it’s quite potent on its own. Cabbage, carrots and celery juice is often recommended for digestive health.

As with any freshly made juice, it’s good to drink raw cabbage juice immediately for the most health benefits. Unusually though, cabbage juice can also be fermented and makes for a particularly good probiotic. Here’s a detailed recipe for how to make fermented cabbage juice if you’re interested.

Here’s a short video showing how to make this healthy juice!

Half a cabbage or more, freshly juiced and ideally several times a day before meals is recommended for peptic ulcer treatment. That sounds like a bit of work, but if you had a highly painful ulcer, I’d imagine you’d get straight to juicing if it could bring you relief.

In another study on using cabbage juice for gastric ulcers, average ulcer crater healing time was around seven days. That’s versus forty two days in a different study with conventional ulcer treatments.

For those drinking juiced cabbage as an ulcer preventative or simply as a healing tonic, every few days might be a good regime. Again, it’s generally best to mix cabbage juice with other healing juices like carrot juice or celery juice. If you do want to have it straight, it’s probably worth diluting it at least half and half with water.

Have you tried fresh cabbage juice for treating ulcers before, or just making it up as a healthy beverage? I’d be interested in what other vegetables you like to mix with it when you make it.

15 thoughts on “How to Make Cabbage Juice for Ulcers”