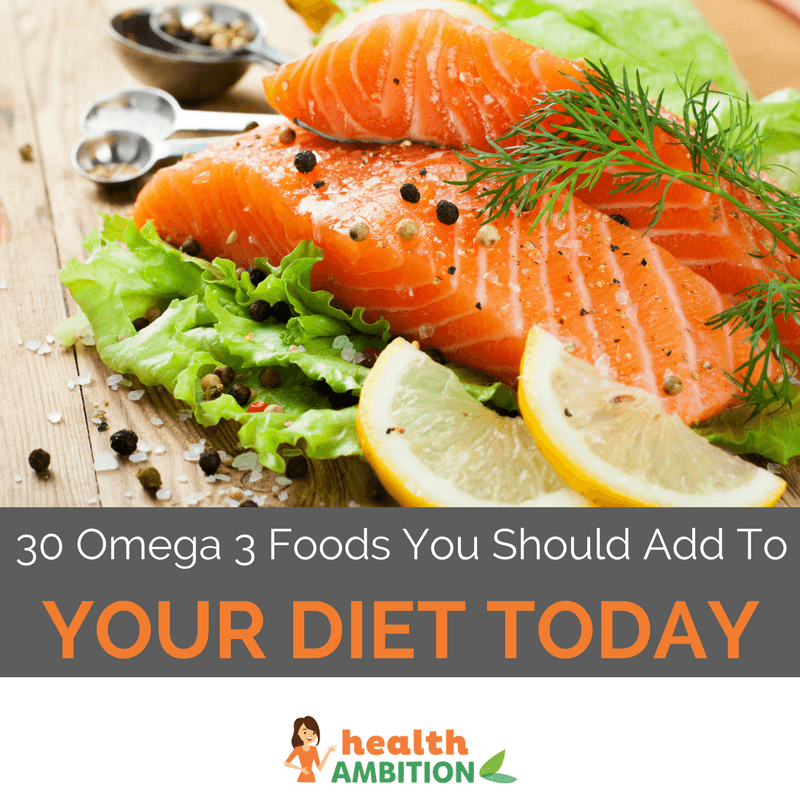 Now more than ever, we’re being told on a daily basis how much we need omega 3 in our diets. This is with good reason. Omega 3 offers our body a plethora of benefits and a deficiency in this essential nutrient can lead to a whole host of health issues.

We often think of omega 3s in relation to fish oil supplements. But what about those of who prefer to stick to an all-natural diet rather than popping a pill? Well, let me tell you about the best omega 3 foods you should add to your diet today!

Why Eat Food Rich In Omega 3?

Omega 3 fatty acids are essential for the human body. Meaning, we are unable to produce them ourselves. This means the only way our body can get them is through the foods we eat.

There are 3 different types of omega 3s. The first two you have no doubt heard of – DHA (docosahexaenoic acid) and EPA (eicosapentaenoic acid). These are found in fish sources like salmon and sardines. The third kind, ALA (alpha-linolenic acid), is found in plant based food sources like nuts and seeds as well as high quality grass-fed cuts of meat.

When it comes to getting enough omega 3s, many people turn to supplementation. This of course is a great way to fill the gaps in your diet. However, the best way to get enough omega 3s is by consuming a diet of foods rich with these essential fatty acids. 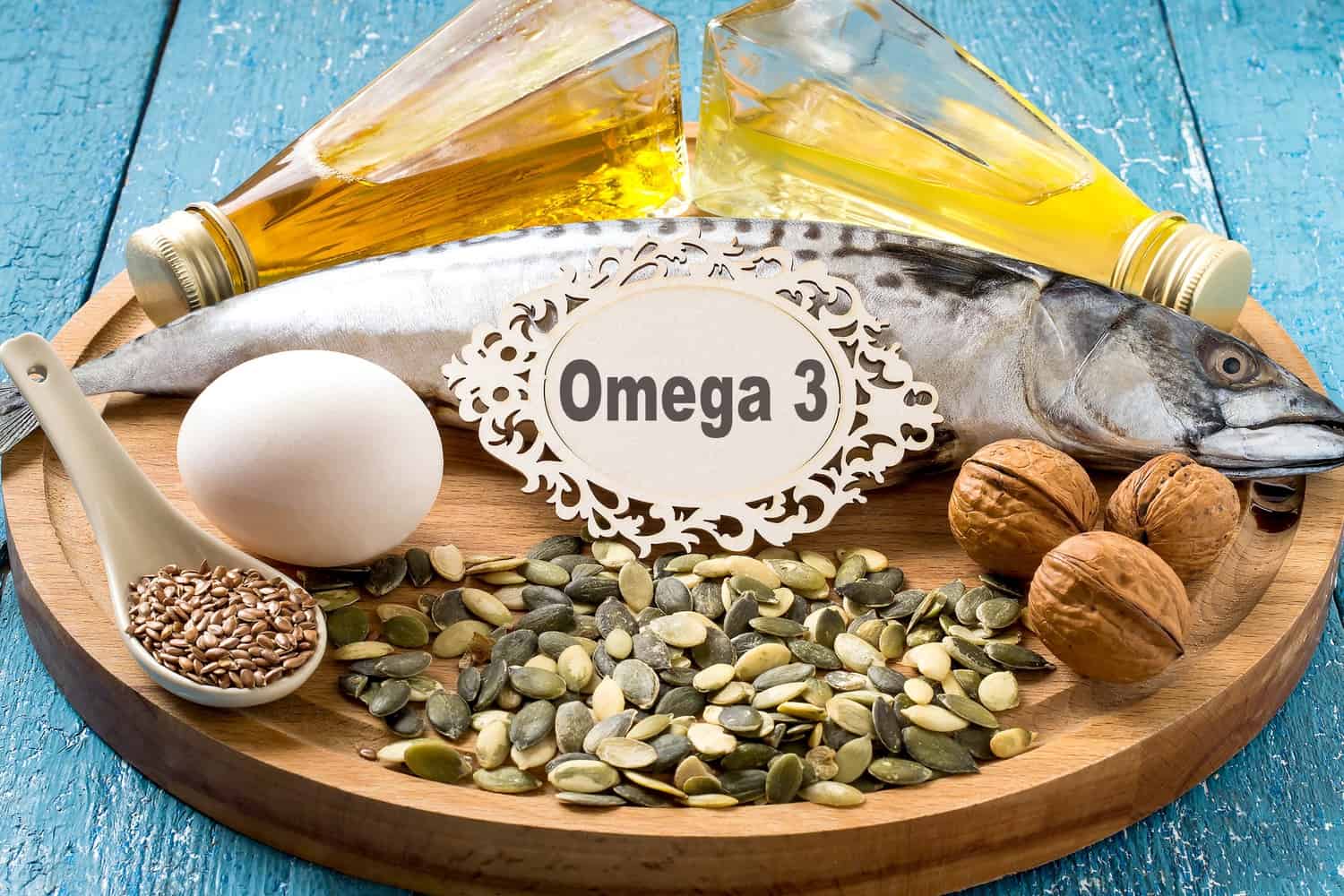 What Are The Best Sources Of Omega 3?

Although the human body is able to turn ALA into DHA and EPA to a certain degree, whenever possible it’s best to get your recommended omega 3 intake from a source of wild caught, oily fresh fish. As many forms of seafood are naturally high in EPA and DHA, experts recommend that we try and eat a fishy feast several times per week. (source)

Although research is still ongoing as to how much ALA converts into DHA and EPA, studies from Harvard Medical Schoolrecommend you get as much as possible of any form of omega 3. Of course direct sources of DHA and EPA are preferable, but for those who can’t stomach a fish platter, adding nuts and seeds to meals can make a big difference.

Do Diets Rich With Omega 3 Foods Really Make A Difference?

You may be asking yourself: ‘will it really make a difference to my life if I eat more fish?’ Well the answer based on historical evidence is yes, it will!

In history the populations that consume a diet rich in omega 3 live much longer and healthier lives. We are talking about small populations where a huge percentage of their residents are centenarians (99 years or older).

For example, the people living in Okinawa, Japan have been studied for decades. These residents are the world’s healthiest and longest living people. In fact, in the space of just 40 years, there were more than 1000 centenarians who lived in Okinawa. The secret to longevity? A typical Okinawan diet is rich with fresh fish, sea vegetables and fresh produce thought to have eight times the omega 3 content of a typical american diet.

Another diet typically rich in sources of omega 3 is that of people living on the coast of the Mediterranean sea. You’ll find it’s rich in fresh fish, lots of fruits and vegetables and herbs like rosemary for flavor rather than salt. If you want to live a long healthy life, one way is to eat like a Greek. In fact, studies have shown that due to the high omega 3 content in a Mediterranean diet, people of this region have a much lower risk of heart disease than Americans.

Are There Any Bad Sources Of Omega 3?

Although no omega 3 is bad, it’s always better to stick to natural sources of ALA, DHA and EPA.

Due to the rising awareness of the benefits of omega 3, many products are being fortified with omega 3. This means that fatty acids are added artificially. You’ll notice many products (especially dairy) throughout your local store are labelled as containing omega 3. 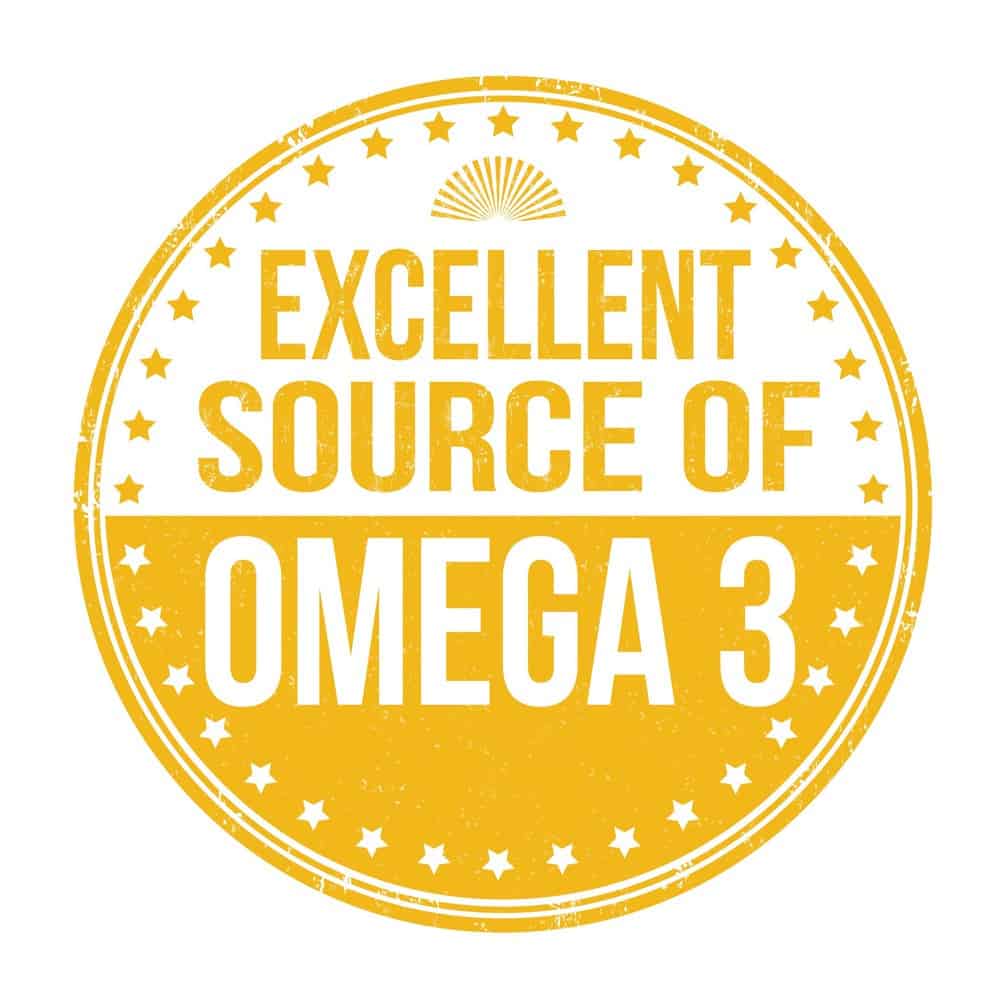 The sources of EPA and DHA in fortified foods come from microalgae. These processed must undergo extensive chemical purifying preparations to remove their natural fishy aroma. (source)

The problem with this is, due to these purifying processes, foods can lose a lot of their fatty acids and antioxidants. Therefore, they will always be inferior to a natural source.

You can find many products fortified with omega 3, some of which may include:

What Are The Best Food Sources Of Omega 3?

If you want to boost the omega 3 content of your diet, you’ll want to find foods that have the highest 3 content. So let us look at exactly what they are.

When it comes to foods rich with omega 3, you can’t beat a plate of fish. The best fish to eat deep-sea, cold water fish. This is the kind that fish oil is extracted from to make omega 3 supplements.

Many people find the idea of adding fish to their weekly menu unappealing. Mainly because people tend to think you need to eat a huge amount in order to meet your recommended daily value (RDV) of omega 3.

Research is still ongoing in regards to the right dose of omega 3 although currently it is thought to be around 500-1000 milligrams per day.

Just to give you an idea, a can of tuna has around 500 mg of omega 3 so getting your daily dose from fish doesn’t need to be difficult. 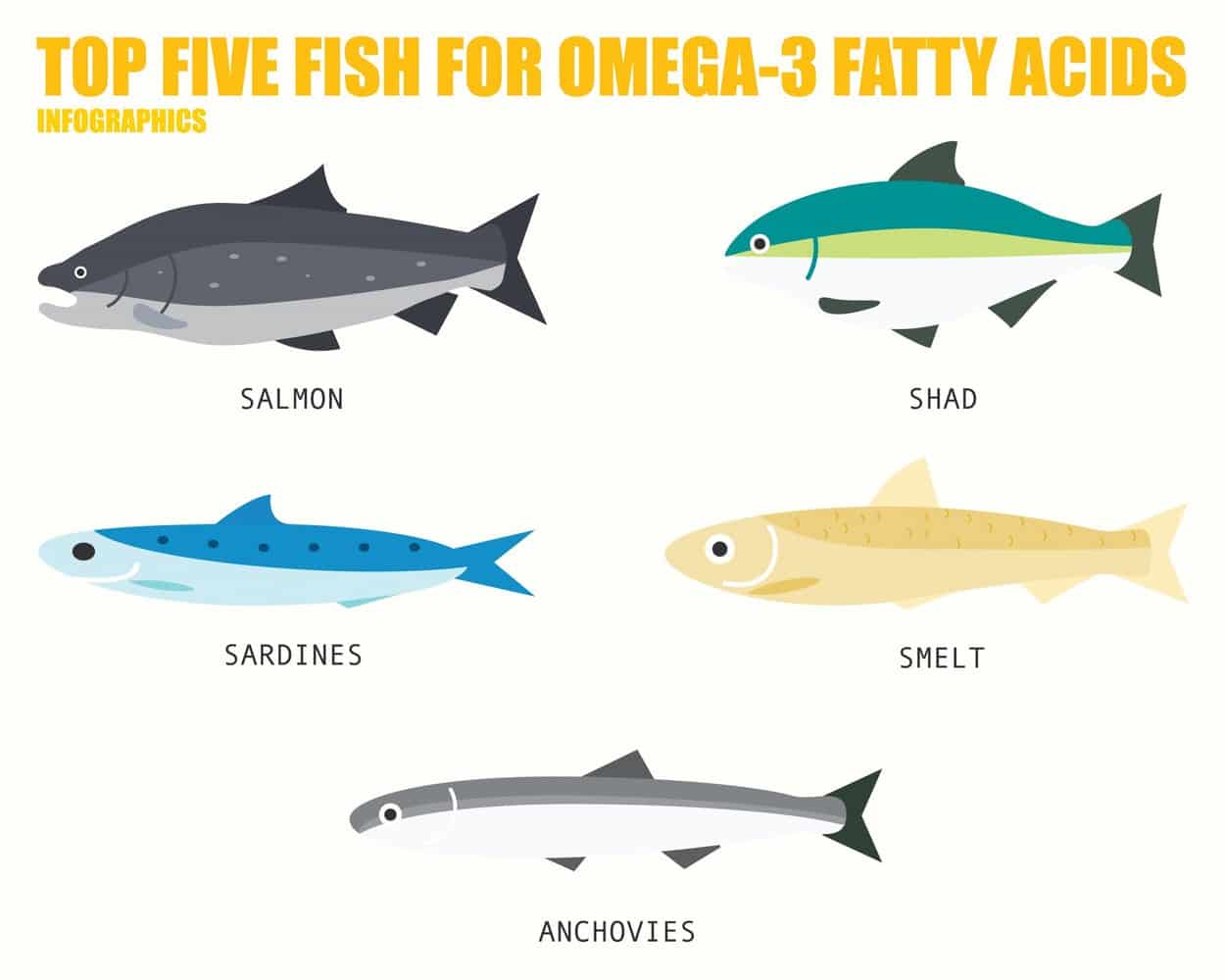 One problem that many people have when considering adding fish into their weekly meal plans is how to cook it. For your average home cook, getting a fish dish right can be a challenge. Plus, with a family of fussy eaters and future food critics anxious to sit around the table, there’s even more pressure to get every meal right.

If you hate fish, you can get just as much omega 3 from flaxseed. Try adding some to meals and shakes for an omega 3 boost.

What about the vegetarians I hear you cry. Don’t worry, there are plenty of alternatives to fish.

Many vegetables, especially the green leafy kind are excellent sources of omega 3 in the form of ALA. Also rich in ALA are a number of nuts and seeds.

Although not the best option compared to natural sources of EPA and DHA, they should definitely be making a regular appearance on your plate.

Here are the top 10 vegetables, nuts and seeds to meet your omega 3 needs. (values are based on 200 calorie serving):

One great way to get the most out of vegetables is by turning them into a smoothie. Often people find it hard to get their five a day, so a smoothie overflowing with omega 3 rich veggies is a great way to reap all the health benefits they have to offer.

Grape leaves are an excellent natural source of omega 3, try them stuffed with rice for a delicious omega 3 meal.

Other Natural Sources Of Omega 3

Many oils contain some degree of omega 3. These include mustard oil and hemp oil. A newer vegetarian oil called algal oil is also becoming increasingly popular as early research shows it’s easily converted to DHA in the body.

Oils with the highest content of omega 3 fatty acids include (values are based on 200 calorie serving): 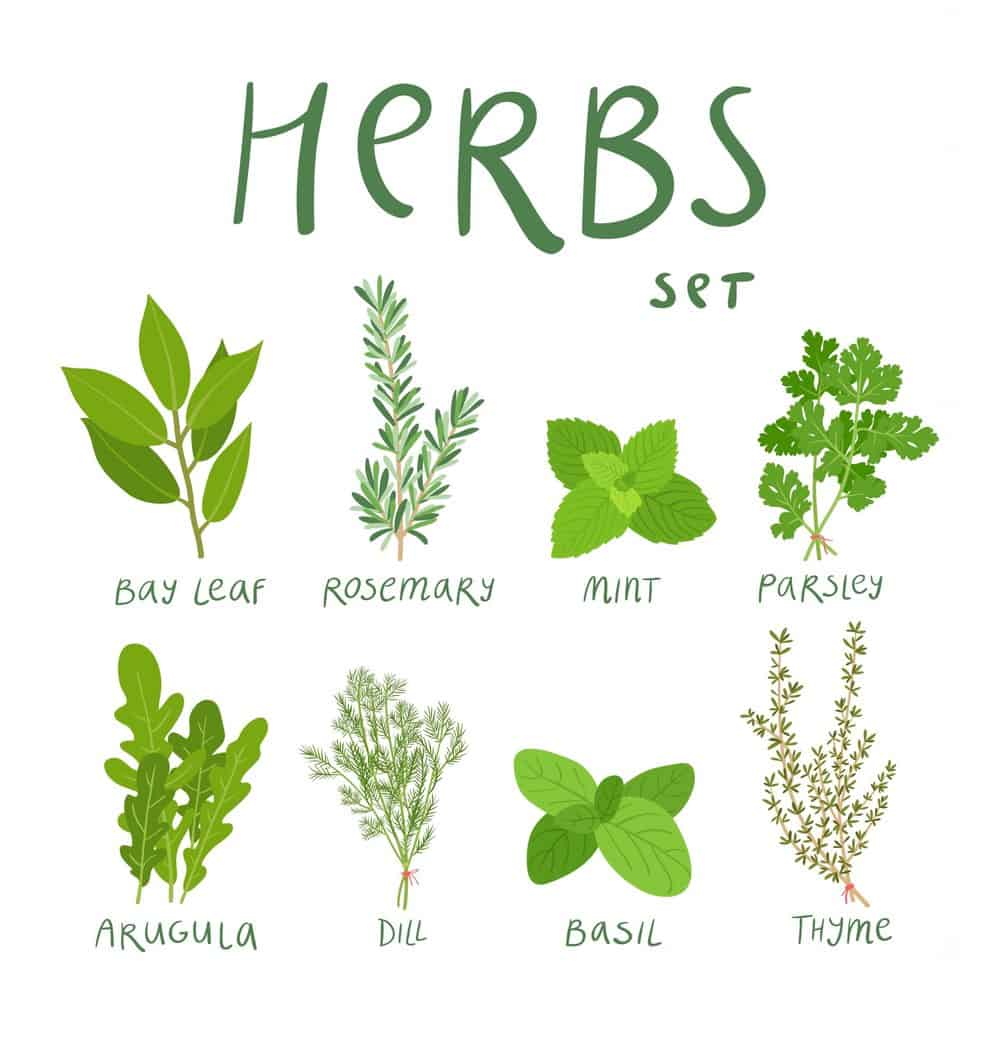 Believe it or not, many herbs and spices contain omega 3. Granted, you’d need to eat a huge portion to get significant levels. But, as many herbs such as rosemary contain powerful antioxidants, it’s worth adding flavor to your food. Every little helps.

Here are some herbs with the highest content of omega 3 fatty acids (values are based on 200 calorie serving):

Seasoning your food with herbs rather than salt is a much healthier option all round. Spicing up your life with some cloves or oregano can give you the omega 3 boost you need.

There are some other foods which are rich in omega 3s that can be added to your diet and don’t fall into any of the above categories. These include:

What Foods Should Be Avoided?

There are some foods that are advertised as being rich in omega 3, however, they are probably best left alone.

Farm raised fish is one definite no-no. Many people think that by eating farm raised fish they’re meeting their omega 3 needs. Unfortunately, that is often not the case.

Other food sources to be avoided include conventionally raised meat (non-organic or not grass-fed) and pasteurized dairy products.

Always go for organic, wild caught fish to get the most omega 3 benefits.

Are Supplements Out of The Question?

No, most definitely not. The fact is regardless of how good your diet is, the majority of Americans are not meeting their daily needs when it comes to omega 3. (source)

There are a number of different omega 3 supplements available in the form of fish oil and krill oil. There are many different products on the market all offering different levels of EPA and DHA. As well as products targeting specific issues such as weight loss.

With so many people concerned about rising levels of pollutants such as mercury affecting the fish we eat, lots of people are left wondering if eating fish is even good for us. This is another reason why people often turn to supplements as an alternative.

The Risks Associated With Omega 3 Deficiency

Harvard University and The Centers For Disease Control and Prevention (CDC) conducted a joint study into the preventable causes of death in the United States based on diet, lifestyle and metabolic risk factors and the results were shocking.

Research showed that low dietary omega 3 fatty acids accounted for an average of 84,000 of preventable deaths in the US. This is why in most cases, a combination of healthy diet packed with omega 3 rich foods and supplementation is advised. Especially anyone showing symptoms of omega 3 deficiency.

According to the University of Maryland Medical Center some of the symptoms of omega 3 deficiency include:

When presented with evidence like this, it is clear to see exactly why adding omega 3 to your diet is so important. Whether it be in the form of food or supplementation, boosting your intake is definitely a good idea.

Try adding as many of these 30 omega 3 foods into your diet as possible and let us know in the comments below if you experience the many omega 3 benefits.