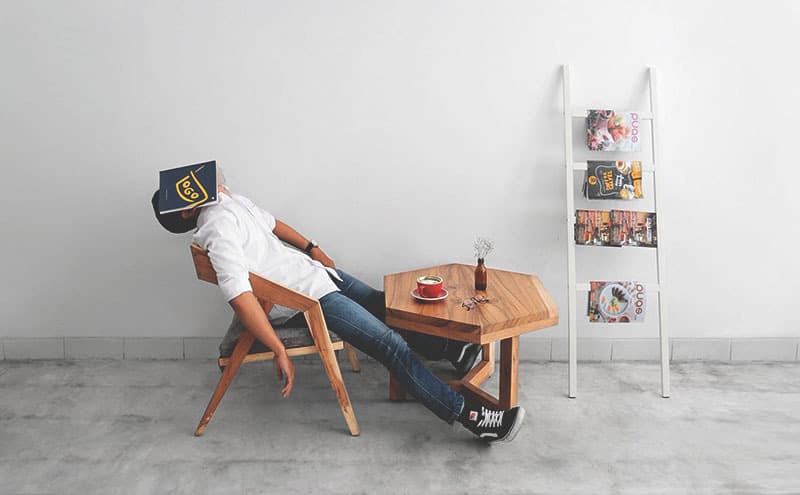 If you suffer from sleep apnea, it’s highly possible you can’t report very much about your symptoms, because it happens while you are asleep.

If symptoms are severe enough, a trip to the doctor and some investigations may tell you that you have become one of at least 25 million people in the US who have sleep apnea. (source)

If you are noticing that night after night you wake from sleep still feeling tired and unrefreshed, it could be that sleep apnea is the problem.

We investigate exactly what sleep apnea is, what causes it, what can be done to avoid it and treat the symptoms.

What Is Sleep Apnea?

Sleep apnea is a common sleeping disorder which causes a person to have pauses in their breathing, or to take very shallow breaths during sleep.

While the sufferer may not be aware of the pauses in breathing that occur, they often have a significantly negative effect on sleep, causing enough disturbance to disrupt important deep phases of our sleep cycle.

The pauses in breathing can last from seconds to a minute or more, and can occur very frequently during a night’s sleep.

Sleep apnea is a long term condition which can result in tiredness, lack of focus and poor quality of life.

There are different types of sleep apnea:

Of the three different types, obstructive sleep apnea is by far the most common. (source)

What Happens During Sleep Apnea?

During sleep, our breathing mechanism remains the same, it just occurs at a slightly slower rate. While we sleep, and particularly in phases of deep sleep, the majority of our muscles relax, including the muscles surrounding the airway and the tongue.

In sleep apnea, these muscles relax to the extent that the airway narrows significantly. While it is not possible, as some people think, to swallow your tongue, the muscle relaxation during sleep can cause the tongue to retract a little, causing further airway occlusion.

A decrease in the body’s oxygen levels as a result of not breathing alerts the brain that there’s a problem. The brain is then stimulated to resolve the problem by switching the muscles around the airway back on, and sometimes by changing body position.

Our usual breathing pattern resumes, and is sometimes signalled by a loud snore, snort or choking noise. (source)

What Are The Effects of Sleep Apnea? 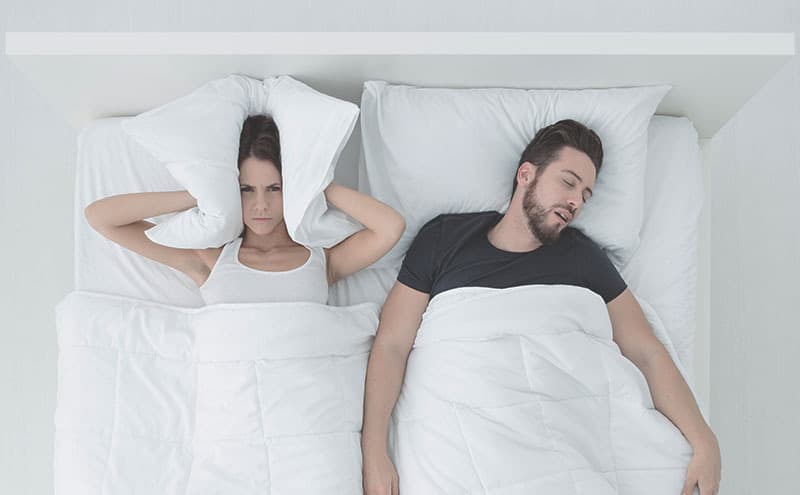 In order to rectify an episode of sleep apnea, the brain has to rouse itself from sleep. It doesn’t have to wake into consciousness from sleep; it can do so in a light sleep phase.

This means that the body’s normal sleep cycle of light sleep phases followed by deep sleep are disrupted on a regular basis throughout the night. It also means that the sufferer is likely to be unaware of their sleep apnea occurring; sleep apnea is much more likely to be identified by a partner or other family member by the following symptoms:

As a result, people with sleep apnea experience a considerable reduction in sleep quality, and notice some or all of the acute symptoms on waking:

However, there are also serious long term effects associated with sleep apnea. As a result of a regular decrease in oxygen levels, the heart becomes stressed, heart rate and blood pressure increase.

The body also releases more of the chemicals associated with increased stress levels and increases production of the substances that increase inflammation.

Other studies have identified significant physiological and functional changes in the brain stems of people with sleep apnea. The brainstem controls the communication between the brain and the rest of the body, and vital functions such as heartbeat, blood pressure, breathing, swallowing and consciousness. (source)

What Are the Risk Factors for Sleep Apnea?

There are several risk factors for sleep apnea. It’s more likely to happen if you sleep on your back, due to the effects of gravity when the muscles relax.

Being overweight or obese is another risk factor. The additional intra-muscular fat increases the bulk of the tissues around the airway, making it more likely that they will become obstructed.

Women are less likely to have sleep apnea than men, and the risk of sleep apnea increases with age. (source)

How Is Sleep Apnea Treated?

Until the 1980s, the only form of treatment for sleep apnea was a tracheostomy – surgery to provide an opening to the lungs via the throat.

Fortunately now there are other treatments. One method which has proven in research to be very effective is a form of respiratory ventilation, known as continuous positive airway pressure, or CPAP.

It involves being fitted with a respiratory mask which covers the nose and mouth. The mask is connected to a machine which continually blows air into the airways during sleep. In effect, it uses air pressure to hold the airway open.

Research has shown that CPAP prevents sleep apnea from occurring. In addition, studies also indicate that the negative effects of sleep apnea on brain tissue were almost completely reversed after long term treatment with CPAP, and it has been proven to reduce blood pressure. (source)

One problem with CPAP, however, is that it requires the person to be connected to a machine while asleep, which can be a problem if they move a lot during the night.

In addition, although CPAP technology has improved over the years, they do produce some noise which may disturb you or your sleeping partner, and take a bit of getting used to.

Other breathing devices are also available, such as oral and nasal dilators designed to keep the airway open.

There are also lifestyle changes sleep apnea sufferers can make to decrease their symptoms. If you are overweight, weight loss is one change that can help.  Similarly, ensuring your sleep environment is set up correctly and comfortably and choosing the right pillow can help mitigate symptoms.

Reducing or avoiding the amount of alcohol and any medicines that cause drowsiness can also help to reduce symptoms.

Sleep apnea is a clinically recognized sleep disorder that can have serious negative effects on health, and the vast majority of people with sleep apnea don’t even know they have it.

Even if undiagnosed, people with sleep apnea are likely to experience symptoms like feeling tired and un-refreshed regularly after a night’s sleep, unable to focus on their work and needing to sleep during the daytime.

Anyone experiencing these symptoms regularly should check with their doctor, as sleep apnea can result in brain damage, high blood pressure, cholesterol and inflammation levels, increased risk of diabetes, liver disease, heart disease and stroke.

Back sleepers, men and people who are overweight are at increased risk of suffering from sleep apnea

Treatment is available for sleep apnea, and while traditionally surgery to open an additional airway at the throat was the only option, sleep apnea can now be managed with respirators and other breathing devices.

It is also possible to reduce the symptoms of sleep apnea with changes to lifestyle.