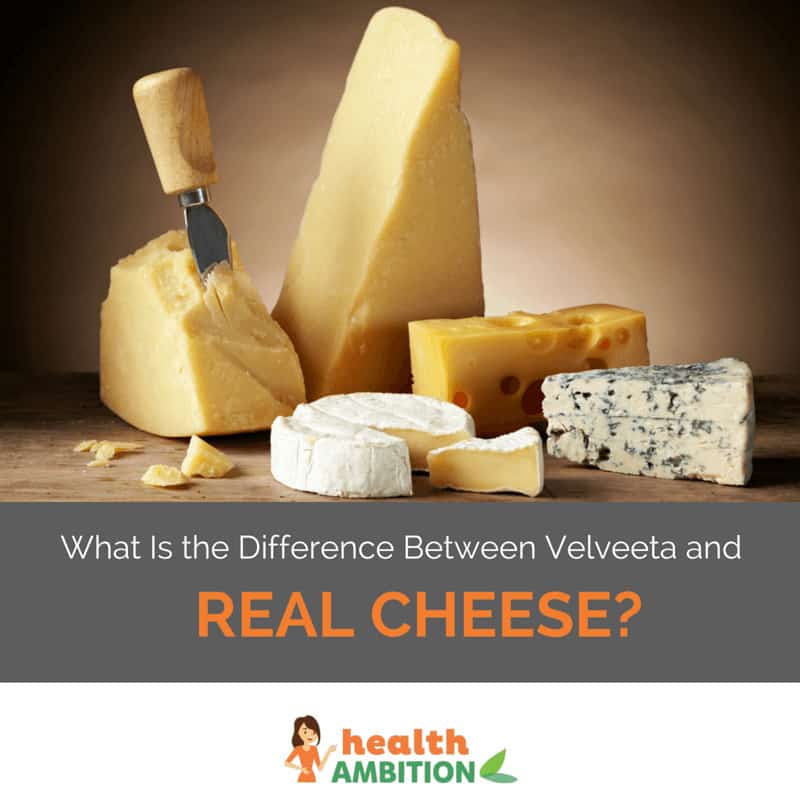 Cheese has got to be one of America’s favorite foods. We add cheese to everything. Meat, bread, vegetables, even cake! There is just something about the smooth, varied flavors that tantalizes our taste buds.

When I was a kid, I was a cheese fiend. Like many kids, I was a fussy eater and cheese was one of those staples my parents could always turn to. If it had cheese in it, I would eat it. Tomatoes on the other hand, now that’s a different story.

The origins of cheese predate recorded history but it is likely that it was inadvertently discovered by farmers who used to keep their milk supply in bags made from animals stomachs.

The theory is that during times when the milk pouches were exposed to high heat, the rennet in the lining of the pouch caused the milk to curdle and form into what we now know as cheese. (sources 1, 2) 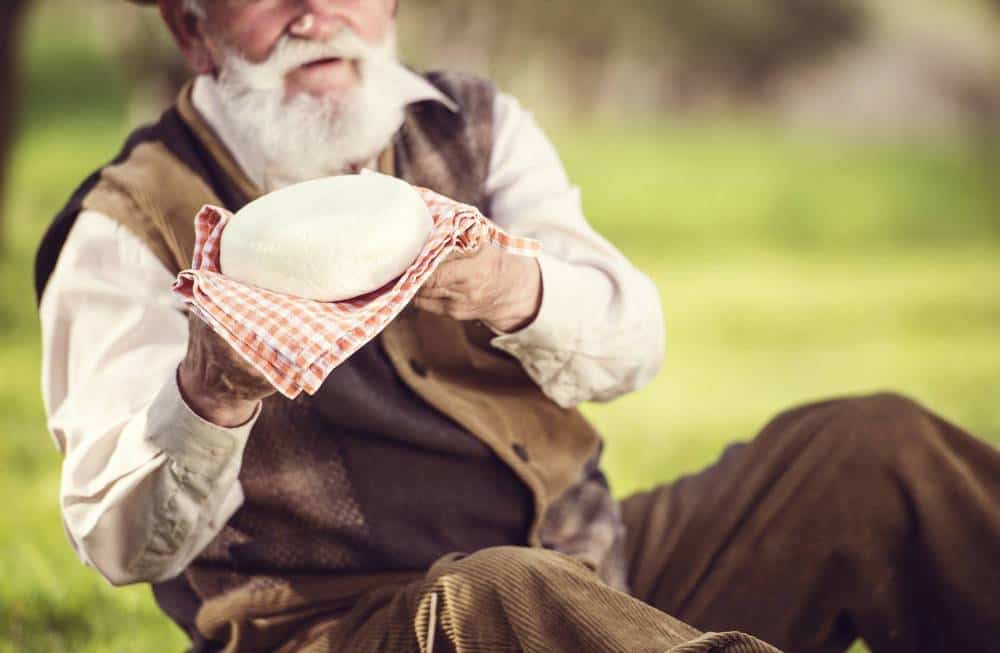 It is believed that Asian travelers brought the art of cheesemaking to Europe finding great popularity when the Roman Empire was at its height. (source)

The Romans introduced cheesemaking to the English and during the Middle Ages, when the Roman Empire was declining, European monks improved the recipe in their monasteries. (source)

In 879 A.D., Italy became the cheesemaking center of Europe where Gorgonzola was developed in the Po Valley. Roquefort is said to have been conceived in a French monastery in Conques as early as 1070. (source)

Cheesemaking became an established food in Europe before it made its way to America in 1620. In 1851 the first cheese factory was built in the United States by Jesse Williams of Onedia County, New York. (source)

Americans consume around 630 pounds of dairy per year. Around 33 pounds of that is cheese. (sources 1, 2) This chart shows just how much Americans favor cheese over any other dairy product.

All cheese begins its life as milk.

Milk is left to coagulate, forming a thick layer of curd which rises to the top of the milk container. This process separates the liquid components (whey) from the solid components (curd).

The milk curds comprise mainly of casein protein, milk fat, and a small amount of water. 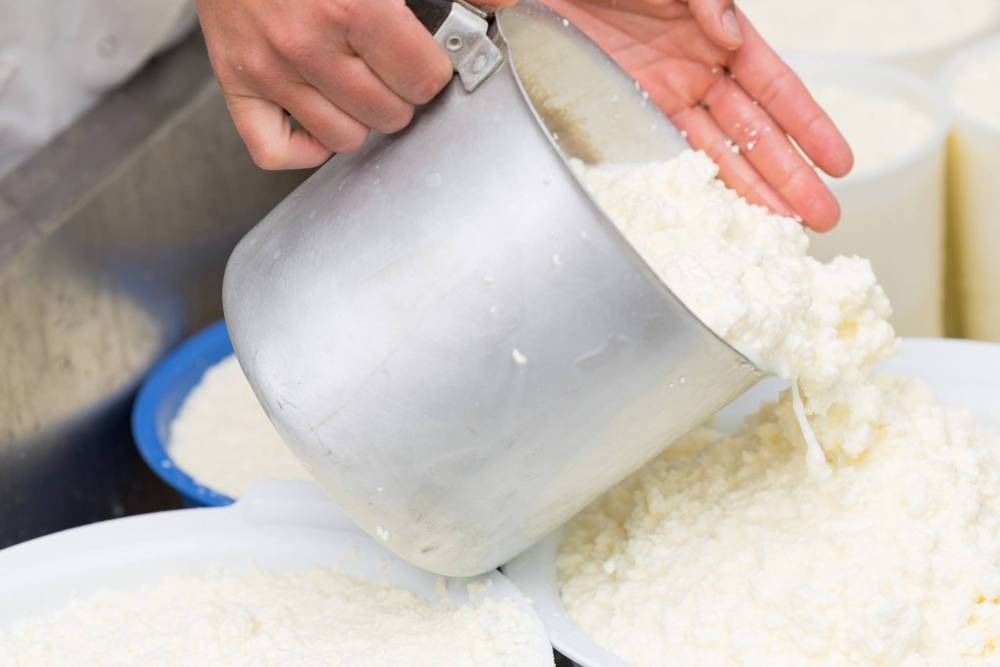 Once the milk curd has been completely separated from the whey components, it is processed by heating and pressing. After this, salt is usually added and any remaining whey is drained off before the cheese is cut into shape.

The final step involves storing the cheese under specific conditions to cure. This takes a certain amount of time and is often referred to as ripening. One the cheese has reached maturation it is ready to ship.

The maturation process involves the development of certain bacteria and fungi (molds). (sources 1, 2)

Some of the primary nutrients of cheese include:

Cheese is often cited for its high calcium content and thus is promoted as a food that is good for healthy bones.

For years, studies have suggested that calcium found in cheese and milk are excellent foods for elderly people suffering from bone diseases such as osteoporosis. (source)

New studies suggest, however, that foods high in acid leach calcium from bones and are one of the primary causes of osteoporosis. (source)

A better source of calcium would be from an alkaline plant based source such as kale which contains 150g of calcium per 100g compared to milk’s 125g. (source) 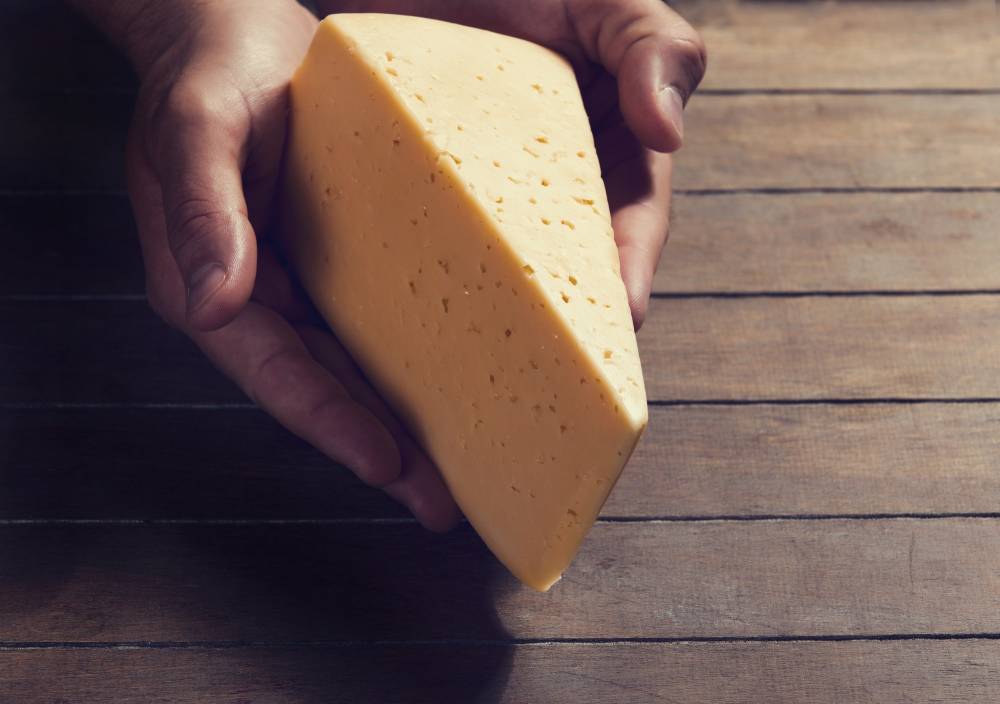 According to a study in the ‘Journal of the National Cancer Institute’, cheese and other dairy products increase the risk of certain cancers including breast cancer. (source)

The Physicians Committee for Responsible Medicine warned in “The New York Times” that allergies, digestive problems and the development of colic are all increased by consuming cheese. (source)

The Center for Science in the Public Interest believes that the high fat content in cheese is responsible for many of the heart attacks we see in Americans today.

Despite this, cheese production continues to rise at an ever increasing rate.

Manufacturers are adding it into more and more dishes, every pizza outlet is devising new ways to add cheese to their crusts, and cheese-like products are on the increase.

One of the most successful of these cheese like products is Velveeta.

Where Did Velveeta Come From?

At the beginning of the 20th century, New York’s Monroe Cheese Company had a problem on their hands: broken cheese.

Swiss cheese wheels coming out of Pennsylvania were not leaving the factory in the most desirable shapes. This less than perfect shape was deemed unsellable and was costing the company money. 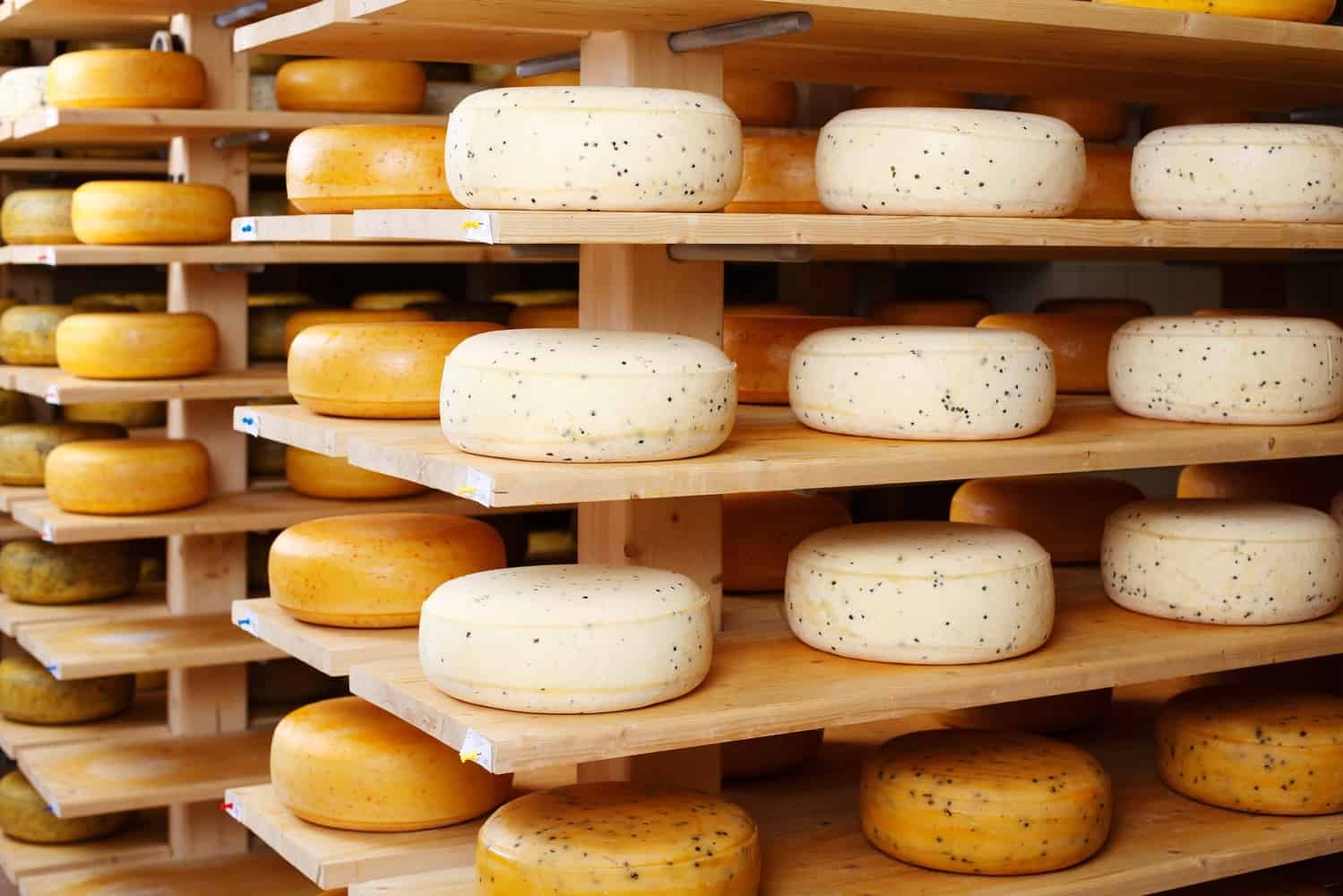 To solve the problem a Swiss immigrant named Emil Frey, developed a smooth cheese-like product by combining the broken left over pieces of cheese with the byproduct whey left over from the cheesemaking process. (sources 1, 2)

In 1927, Kraft acquired the Velveeta cheese company and marketed it as a health food for woman who wanted to lose weight by opting for a milder, lighter cheese option. (source)

During the 1950’s Kraft released its ‘Kraft singles’, a convenient single serve version of the cheese-like product, and began marketing Velveeta as a sauce or dip ingredient to avoid competition between the two products. (source)

What Is the Difference Between Velveeta and Real Cheese?

Today Velveeta is a different product to that of the one that contained actual cheese during the 1920s.

Modern Velveeta is made from whey protein concentrate and milk protein. (source)

In 2002 the FDA became aware that the ingredients of Velveeta didn’t contain any actual cheese. Kraft were ordered to change its packaging from ‘cheese spread’ to something closer to the truth. Velveeta is now labeled as a “Pasteurized Prepared Cheese Product.” (source)

So what is the difference between real cheese and Velveeta?

As mentioned earlier, most real cheeses are made up of milk and rennet. A far cry from the ingredient list above. But what else?

Real cheesemaking develops natural preservatives. It is true that many varieties do have preservatives added but true cheese does not require this. (source)

Velveeta however, contains a wide variety of colorings and preservatives, something which natural cheese does not. (source)

There is certainly something about the extensive ingredient list of Velveeta that many people are drawn too. 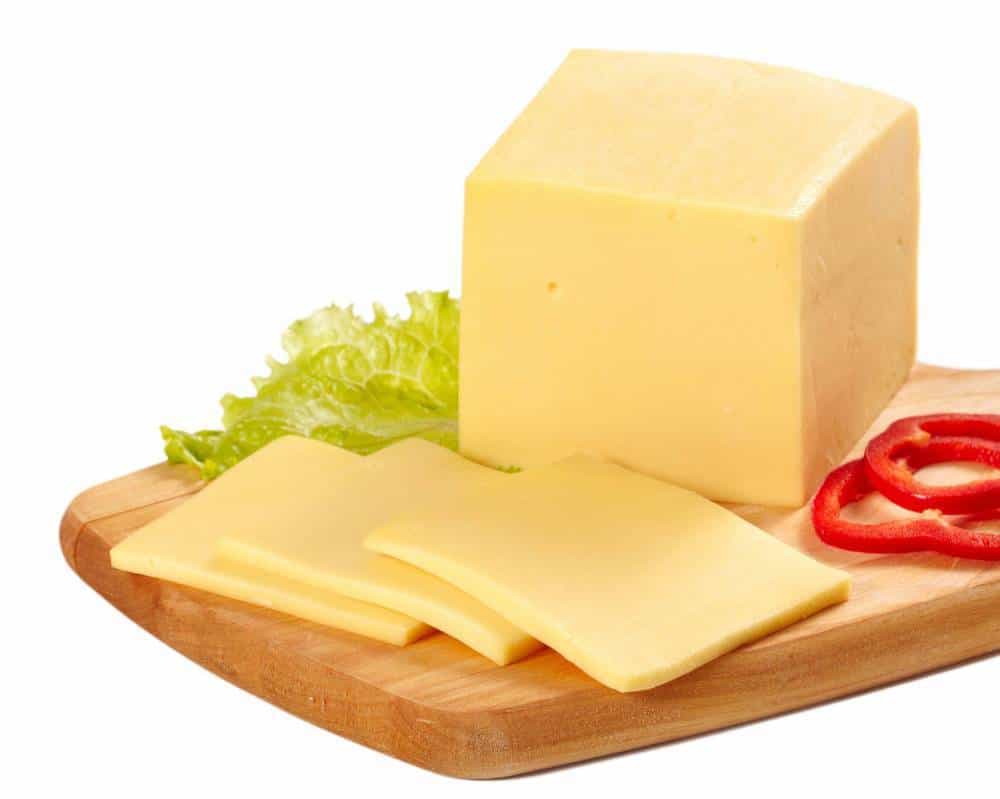 The almost 600% increase of added ingredients is definitely getting people all hot and bothered. In 2014 Kraft created a “cheesepocalype” when spokesperson Jody Moore made this announcement:

“Given the incredible popularity of Velveeta this time of year, it is possible consumers may not be able to find their favorite product on store shelves over the next couple of weeks,”

With the Super Bowl and 2014 Winter Olympics around the corner, people took to Twitter to announce their horror.

“Just bought a half eaten block of velveeta on ebay for 80 bucks. 10 chip per guest rationing in effect for super bowl party. No double dips.”

“You know your friends know & care about you when you wake up to texts, emails & fb tags about the #velveetashortage #quesoscare”

“Velveeta is the first thing they took away from all the Districts in Hunger Games. Don’t ignore the warning signs. #Velveetashortage” (source)

Kraft spokesperson Moore went on to say:
“I can tell you there is a combination of factors involved, but the driver is really the high demand.”

Reports began to pop up all over the internet that Kraft had created the “supposed” shortage to increase publicity and use social media metrics to figure out their geographic fan base in an attempt to further target marketing.

Adage.com wrote:
“Kraft was already well into a project aided by Nielsen’s Cambridge Group consulting unit to identify Velveeta’s “super-consumers,” the people who, by Cambridge’s reckoning, account for 10% of buyers.”
(source)

Velveeta’s official Tumblr page had this to say:

While the current Cheesepocalypse is a difficult time for our great nation, we are incredibly humbled and appreciative of the outpouring of love and support for the Liquid Gold of Velveeta

That statement was followed by this: “There is currently limited availability of some Velveeta products in many stores nationwide.”
(source)

Director of analytics for Kraft, Cannon Koo, had this to say in an interview regarding the shortage scare: “It was great. It helped our sales.”
(source)

It’s safe to say that whether or not there really was a shortage at a time when Velveeta was a particularly popular food choice in America, a huge amount of free advertising and sales were generated.

Something Cheesy Is Going On Here

Although Velveeta contains many of the same primary ingredients of real cheese, it is so highly processed that it more of a Frankenstein than an organic variation.

The flavor and consistency of Velveeta is quite different to real cheese due to the array of totally different ingredients, additives, and preservatives.

One of the most worrying ingredients in Velveeta is calcium phosphate.

At first glance, this may seem like an innocent addition as phosphates occur naturally in real cheese. 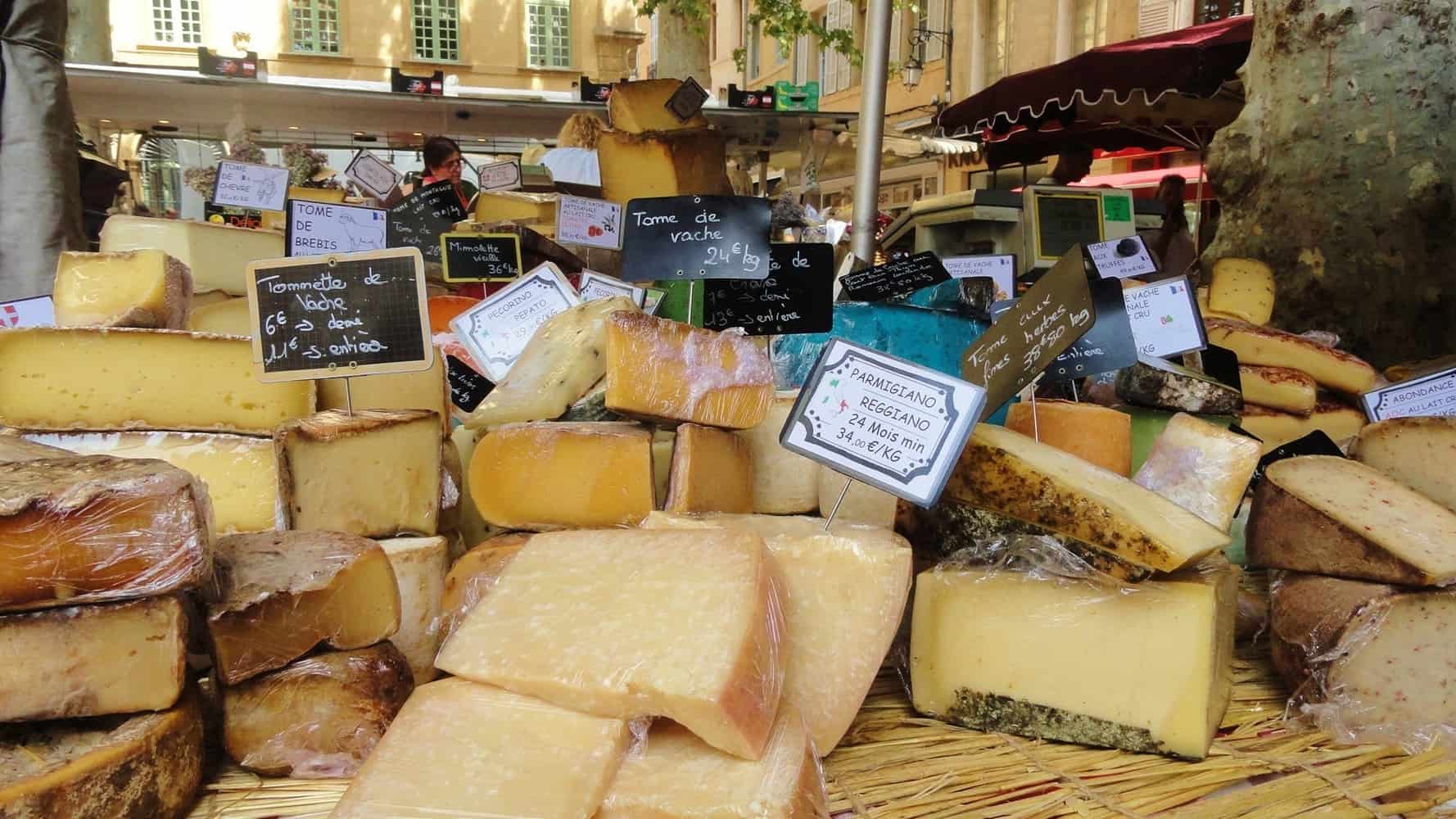 Unfortunately, research associates processed phosphates with a higher risk of heart disease in healthy people. (sources 1, 2) Worse yet, people with chronic kidney failure are at risk of death because of the consumption of processed phosphates. (source)

The bright yellow-orange color which is synomones with Velveeta is achieved by adding apocarotenal, a synthetic pigment commonly used in pharmaceuticals and cosmetics. (source)

Annatto, a natural substance derived from the achiote tree is also present in Velveeta. This chemical is marked as one of the most common food allergens in the US. (source)

Now you know what is the difference between velveeta and real cheese. It’s off putting, isn’t it?

Real, natural organic cheese can be a good source of protein and calcium provided that its consumption is kept moderately low.

Depending on the variety you choose, it can give a good boost of vitamins D, A, B2, B12, magnesium, and phosphorus.

The best place to get your hands of some tasty organic fair is to locate your local cheesemaker who will use the finest ingredients. It will cost a little more but it will be healthier, use less if any preservatives, and taste much better.

Stay away from the manufactured, highly processed Frankenstein cheese-like product, and stick to the real deal.