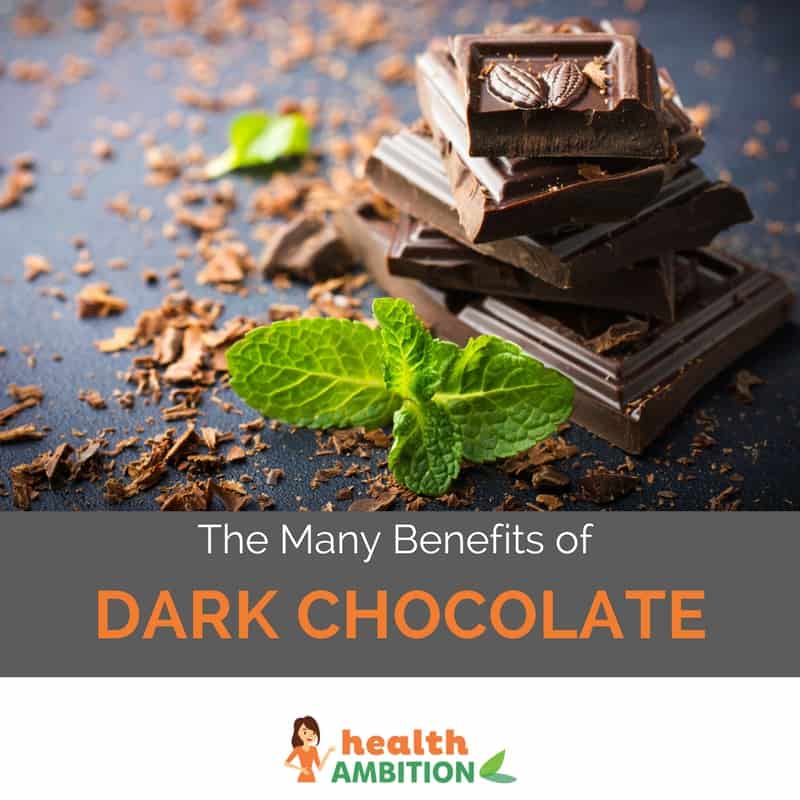 If you’re anything like me, I have no doubt you just read this title and thought:

The good news is, you’re right! Chocolate is the ultimate comfort food and dark chocolate (I’m talking the stuff that’s 75% cocoa and over) is one of the best sources of antioxidants on the planet.

Now if your sweet tooth craves the version mixed with heaps of sugar and milk, I’m sorry I can’t help you. But if your idea of heaven is to dip your hand into a box of black magic, then you’re in luck.

Here are some of the many health benefits dark chocolate has to offer which have been backed by science!

Dark chocolate is made from the seed of the cocoa tree and like most seeds, it is super nutritious.

That is why a high cocoa content chocolate (75-80%) manages to retain a large amount of those essential nutrients.

Just look at what 100 grams has to offer:

That is some nutrient power right there!

Of course, 100 grams is not something you should be consuming daily, especially not at 600 calories! Therefore, of course it should be eaten in moderation.

Antioxidants are the free radical fighting super heroes of the health world.

When foods are measured for the amount of antioxidants they contain, it is called Oxygen Radical Absorbance Capacity or ORAC.

This test shows how well the antioxidants in certain foods ward off free radicals. Although it is conducted in a test tube and therefore, could be different within the human body it is still worth noting that raw cocoa beans are actually one of the highest scoring foods.

One study even showed that cocoa and dark chocolate contained more antioxidants than some of the most antioxidant associated foods such as blueberries.

Can Reduce The Risk of Cancer

Chocolate contains a nutrient called pentamer, which has proven effective at slowing the spread of cancer cells. In a 2005 study conducted in London, pentamer prevented the production of the proteins that cancer cells needed to spread. Eating chocolate may help to reduce your risk of cancer, or prevent it before it sets in.

A number of studies have shown that dark chocolate can improve cardiovascular health by lowering blood pressure and improving blood flow.

This is mainly because of the flavanols in dark chocolate. They help to stimulate the production of the gas nitric oxide (NO).

Oxidized LDL (or ‘bad’) cholesterol is significant risk factor for heart disease. When LDL is oxidized, it means it has reacted with harmful free radicals.

Considering dark chocolate is packed with free radical fighting antioxidants, it comes as no particular surprise that is capable of lowering oxidized LDL.

Can Lower the Risk of Cardiovascular Disease

Lowering oxidized LDL cholesterol is just one of the ways dark chocolate can improve cardiovascular health.

A recent study that looked at a group of elderly men, showed that cocoa reduced the risk of cardiovascular death by an enormous 50% over the course of 15 years.

Moreover, further studies have showed that eating dark chocolate more than twice a week lowered the risk of calcified plaque in arteries by 32%.

Furthermore, other studies have shown that those who indulged in chocolate more than 5 times per week lowered the risk of cardiovascular disease (heart disease and stroke) by 57%.

This may be because one of the main contributing factors to heart attacks is blood clotting. Eating chocolate slows down clotting, reducing the chances that you will suffer from a heart attack

Plus, One study conducted in Sweden found that eating up to 45 grams of chocolate a week can reduce your risk of stroke by as much as 20%.

That sounds like an excellent excuse to treat yourself to the taste of chocolate nightly!

Dark Chocolate can Protect Your Skin From Sun Damage

The flavanols in dark chocolate can do a number of wondrous things.

They can protect your skin from sun induced damage while improving blood flow to the skin and increase skin hydration.

The MED (minimal erythemal dose) is the measurement of the minimum amount of UVB rays required to cause redness in the skin. This is 24 hours after exposure.

In one study, after consuming dark chocolate high in flavanols for 12 weeks the MED more than doubled in 30 people.

It’s not just good for your sweet tooth, but it seems chocolate is also great for your skin! Dark chocolate doesn’t protect the skin from UV rays, it can also improve its appearance by fighting acne.

A study done in Britain found that those who drank a cup of cocoa were better able to do mental math. The flavonols (a type of flavonoid in chocolate) proved effective at boosting brain power, so it may be a good idea to load up on chocolate before you take a test.

Cocoa also contains caffeine and theobromine, these can also improve brain function in the short term.

Chocolate serves as a delicious method of fighting cold, or so scientists have discovered. The sweet treat contains theobromine, which has been proven to reduce activity of the vagus nerve: the part of the brain that controls your coughing.

Researchers have even begun to look into a theobromine-based cough syrup to replace the addictive codeine commonly used today.

Did you know that chocolate makes your body more sensitive to insulin? Insulin is the hormone that controls your blood sugar. A loss in sensitivity to insulin is the cause of Type 2 Diabetes.

While the sugar content in most chocolate bars is a no-no for diabetics, a study showed that chocolate increased insulin sensitivity and decreased blood pressure in healthy people.

The Scientific American published an article describing the benefits of dark chocolate for the beneficial bacteria living in your intestines.

Both the antioxidants and the fiber in the cocoa are fermented by the bacteria, which produce probiotic compounds that feeds and fuels the intestinal flora. This can lead to significant improvements in digestion, immunity, and overall health.

Jeanne Louise Calment was the world’s longest living human. She is reported to have eaten two and a half pounds of chocolate every week.

Recent studies have discovered that chocolate can add two years to a person’s life expectancy.

These benefits are pretty hard to believe, huh? It’s true that the cocoa plant does contain many chemicals which have a positive impact on health. However, most of us aren’t eating cocoa beans straight from the trea. Most chocolate candies are heavily processed with added sugar and fat. Those are two ingredients which definitely aren’t good for your health.

To ensure this article is balanced, let’s take a look at some of the downsides associated with this tasty treat.

The Drawback of Chocolate

Chocoholics, I’ve got some bad news for you: Dark chocolate isn’t as healthy as you might think! Commercially prepared chocolate contains A LOT of saturated fat and calories.

40 grams of dark chocolate or 4 to 7 small squares, contains up to 227 calories and 12 grams of saturated fat. That may not be a lot of calories, but 12 grams is 60% of your total saturated fat allowance per day. If you have a hefty chocolate habit, you’re getting a lot more fat in your diet than you want.

Chocolate also contains a lot of sugar, which, as we all know from the many Health Ambition posts slamming it, is one of the least healthy ingredients on the planet. Sugar can cause all kinds of health problems, which is why most health experts tell you to stay away from chocolates and candies of all sorts.

Chocolate – particularly dark chocolate – also contains significant amounts of caffeine. You won’t get as much as you would from a cup of tea or coffee, but it’s still enough that pregnant women should consider avoiding chocolate. It has been known to pose a risk to unborn babies, as well as to newborns.

The benefits listed above are almost all from dark chocolate, but most of the chocolate sold on the market today is milk chocolate. You may eat chocolate thinking it will make you healthier, but all you’re doing is consuming more calories, saturated fat, and sugar from the not-quite-dark chocolate you buy.

Is dark chocolate good for you? Maybe. You can see by the above list that certain components are linked to an extensive range of benefits. How significant they are outside the lab remains to be seen. However, as far as desserts go, I think you could do worse.

Is milk chocolate good for you? That’s a tougher question to answer. Milk chocolate contains far more sugar than dark chocolate, not to mention the addition of milk itself. There is also less cocoa in the milk chocolate, and cocoa is what provides the health benefits listed above. 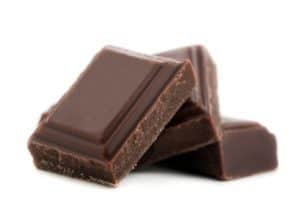 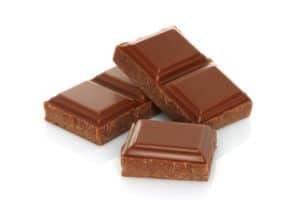 So, while dark chocolate is higher in calories and total fat, milk chocolate contains a lot more sodium and sugar.

What does this mean?

While saturated fat can be unhealthy, the truth is that sugar is the worst nutrient for your body. It can add to your existing body fat, but it takes much longer for fats to cause problems.

So in the end, we can see that dark chocolate is the FAR better choice for you. Not only does it offer a wider range of benefits, but the downsides of dark chocolate are fewer. You’ll still need to consume dark chocolate in moderation, but you know you’ll be putting excellent nutrients into your body thanks to the tasty dark chocolate!